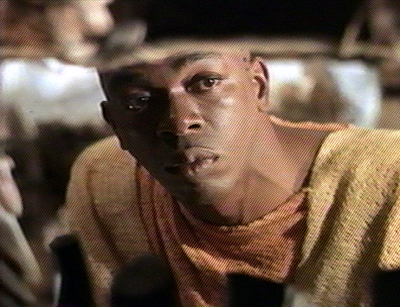 I was delighted to watch Doctor Dolittle (the 1967 version with Rex Harrison) recently. It's delightful—it's weird—and it had some Shakespearean allusions, too! Perfect!

In this scene, the Doctor and his companions have been captured by the indigenous people of an immense floating island on which they have been shipwrecked. They've been taken to a sort of holding cell and—well, see for yourself (I'll add some commentary later):

There are so many interesting things about that clip that I don't know quite where to begin.

First, there's interest in the humor of the presentation. When William Shakespeare the Tenth says, "What a funny accent!" it's funny because it's unexpected. Naturally, it shouldn't be unexpected that someone looking very different from Doctor Dolittle should speak English, but we're set up to find it unexpected. Still, when we laugh, it's troubling because of the way we've been deceived.

Second, we're presented with this idyllic picture of a culture with its own sophistication, it's own deeply-considered ways of doing things, and its own heritage. But those things—that culture—isn't exactly indigenous! One of their favorite authors is William Shakespeare! Is this just a legacy of a colonial period now faded?

Third, we're on an island. A floating island! (And not the desert—for which, q.v.). That's great because most post-colonial criticism of Shakespeare is devoted to The Tempest, which takes place on an island, too.

There are other points of interest—that white men who have previously come to the island committed the shocking faux pas of killing people before being introduced!

A reader encouraged me to take another look at Shakespeare Wallah before dismissing it so summarily, so I will do so. But, for now, I found much more to think about—and much more all-around enjoyment!—in Doctor Dolittle.
Links: The Film at IMDB.