Star Trek, Having Taken a Stab at Macbeth (Ha!), Turns to Romeo and Juliet 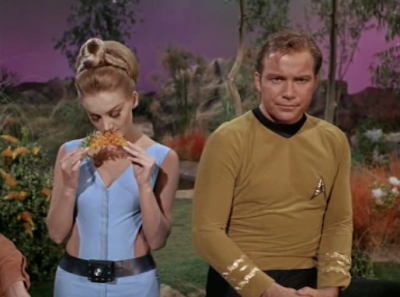 “By Any Other Name.” By D.C. Fontana and Jerome Bixby. Perf. William Shatner, Leonard Nimoy, DeForest Kelley, Nichelle Nichols, James Doohan, and Walter Koenig. Dir. Marc Daniels. Star Trek. Season 2, episode 22. NBC. 23 February 1968. DVD. Paramount, 2008.
I have seen this episode listed with the annotation "Kirk misquotes a line from Romeo and Juliet"—but he doesn't. One may object to his delivery, but not to his accuracy.

[Update: Yes, he does misquote the line. I can't think how I missed it before, but Kirk says "any other name"; the line actually reads "any other word." Thank you. —Bardfilm]

[Update to the update: No, he doesn't misquote the line. Apparently, he's quoting from Q1, which has "name." Q2 through Q4 have "word," as does the First Folio, but Kirk has clearly spent his time at the Folger Shakespeare Library studying their copy of Q1. Thanks again! —Bardfilm]

In this episode, some crazy aliens have taken on human form and intend to take the crew of the Enterprise back with them to their home world. Wistfully, Captain Kirk quotes from "a great human poet, Shakespeare."


Although it's never been publicly recognized (to my knowledge), the episode goes on to borrow themes from Othello: Spock, an Iago analogue, helps defeat the aliens by increasing their emotions—notably, jealousy. If I had the resources (among with I include time), I would dub over some of Spock's speeches to the chief male alien with Iago's lines, creating something truly rich and strange. Though perhaps more strange than rich. Some day, perhaps.
Links: A Gateway to Star Trek Information at Wikipedia.

Just stumbled by looking for Star Trek episodes modeled on Shakespeare. Found this page and thought I'd stick my two cents in. I really like "word" better than "name." The flower has one name. What word shall it be? Shall it be "rose"? Or some other WORD? The name is a box; we need a word to fill it. Yet "name" seems to have carried the day.

I'm reminded of the grammatically perfect lyric to Amazing Grace: I was lost, but now am found, was blind but now can see. One rarely hears it anymore. It's been dumbed down. I can't help feeling the same thing happened to "word," however long ago it was.