Shakespearean Subtitles in Monty Python and the Holy Grail 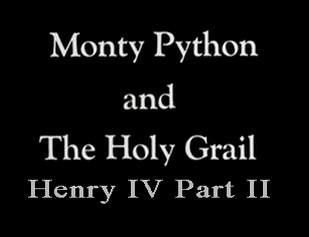 Monty Python and the Holy Grail. Dir. Terry Gilliam and Terry Jones. Perf. Terry Gilliam, John Cleese, Graham Chapman, Terry Jones, Michael Palin, and Eric Idle. 1975. DVD. Columbia Tri-Star, 2001.
Although it's something of an anachronism for Shakespeare to turn up in the reign of Arthur, King of the Britons, he does. In the subtitles. One of the options on the DVD of Monty Python and the Holy Grail is "Subtitles for People who don't like the Film." I happen to like the film, so I don't look at them too often, but they are made up of random lines from Shakespeare's Henry IV, Part II.

[Note: Upon recent review, Bardfilm has determined that the lines may not be that random after all. There's a method in the randomness of the lines—most of them make a sort of sense out of the lines as they are delivered.]