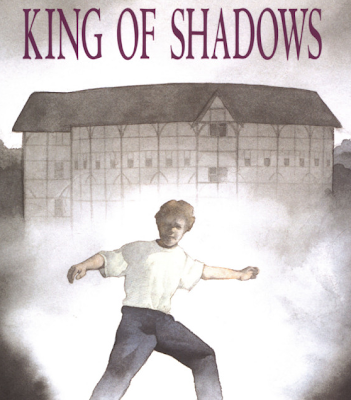 Cooper, Susan. King of Shadows. New York: Aladdin, 2005.
We may be able to hold Andrew Gurr responsible for the best young adult novel based on Shakespeare. His theories and his work with the New Globe Theatre form part of the plot of Susan Cooper's King of Shadows.

I've adored Susan Cooper from my earliest days, when someone gave me a copy of Over Sea, Under Stone, the first book in the series that's known by the title of its second book, The Dark is Rising. I was entranced. The bits of the Welsh language, the Arthurian legend (not so legendary after all!), the adventure, the characters, the fear, the scenery, and all the rest gave the books so much depth and interest that I couldn't put them down. I read and re-read them and lent them to anyone who would borrow them.  [Until one friend kept them for so many years that I had to buy myself all new copies—but that's another story.]

In 1998, this amazing author published another amazing novel: King of Shadows. The premise will sound tacky and the image on the cover looks tacky, but—trust me here!—the novel itself is stunning.

The plot involves a young American actor who is chosen for a production of A Midsummer Night's Dream that will be put on at the New Globe Theatre ("King of Shadows" is one of the names of Oberon; that gives the book its title). He travels to England—and then he travels back in time to the original Globe, meeting Shakespeare and saving the universe as he does so! Well, at least he meets Shakespeare.

Yes, that sounds tacky and somewhat typical. But try it—it's really amazing! And it's perfect for a Christmas gift to each of the youngsters in your life.

This book looks awesome ... luckily I have no compunction about going into the YA section of a bookstore and buying things for myself.

I'll get to this right after I gobble up "The Long Winter."