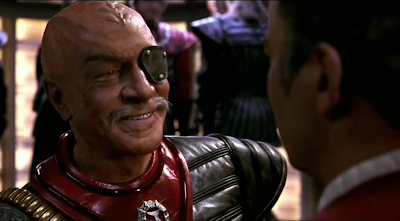 Star Trek VI: The Undiscovered Country. Dir. Nicholas Meyer. Perf. William Shatner, Leonard Nimoy, DeForest Kelley, Nichelle Nichols, James Doohan, Walter Koenig, and George Takei. 1991. DVD. Paramount, 2004.
We're still in Star Trek VI: The Undiscovered Country today, mining it for more Shakespearean fragments.  I didn't offer a lot of commentary on the previous clip (the one that ends with Chekov looking skeptical at Shakespeare "in the original Klingon").  The reason that is so funny (and the reason I left the reference to "Earth—Hitler—1938" in the clip below) is the Nazi appropriation of Shakespeare in World War II.  The common story is that the Nazis claimed that Shakespeare had really been written in German, but the English translated him into English and stole him away from his rightful heritage.  I haven't found that claim in a scholarly source, though I have found statements noting that Shakespeare was to be treated as a German author when non-German playwrights were banned.

In the clip below, you get not one—not two—not three—but four, four, FFFFFOUUURRRR Shakespeare references for the price of one!