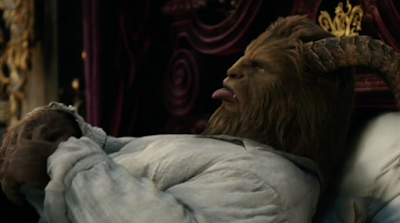 Beauty and the Beast. Dir. Bill Condon. Perf. Emma Watson, Dan Stevens, Luke Evans, and Kevin Kline. 2017. DVD. Walt Disney Studios Home Entertainment, 2017.
Having seen the animated Beauty and the Beast a few times and having gleaned (as I thought) all the Shakespeare it had to offer (for which, q.v.), I wasn't expecting to find any in the live-action remake.

But I was delightfully surprised by hearing a quote from Midsummer Night's Dream and a discussion of Romeo and Juliet in the film.

Prior to this scene, the Beast has been injured saving Belle from the wolves. For some reason (probably one not unrelated to the overall theme of the film), Belle's reciting some lines from Hermia's speech in Act I of Midsummer Night's Dream (I've put editorial brackets around the line that does not actually make its way into the film but that gives an object to the first sentence that does):


[Things base and vile, holding no quality]
Love can transpose to form and dignity.
Love looks not with the eyes but with the mind;
And therefore is wing'd Cupid pointed blind. (I.i.232-35)

The implication is that Beauty can, indeed, love the Beast—love does not look with the eyes, after all. And the rest of the scene, as is plays out, helps us see with the mind rather than with the eyes:

That's interesting in a few ways. First, the Beast says that there "are so many better things to read" than Romeo and Juliet. Perhaps he, too, is thinking of Midsummer Night's Dream, where a lady falls in love with someone whose outer appearance wouldn't usually inspire love: Bottom the Weaver with an ass head.

It's also interesting that the Beast, despite the "expensive education" he says he received, didn't pick up on the rules of iambic pentameter.  The word "wing'd" should not be pronounced with two syllables (i.e., "wingèd") in this line—it ruins the meter! It should read in this way (capitals indicate stressed syllables): "and THEREfore IS wing'd CUpid PAINTed BLIND."

Sorry. That's a bit of a digression. The point is that I was surprised to find Shakespeare in the film.

But the Shakespeare actually comes in quite a bit earlier than this scene. Here's an exchange from Belle's first song


[MONSIEUR JEAN]
Where are you off to?

[BELLE]
To return this book to Père Robert. It's about two lovers in fair Verona.

Compare that to the equivalent scene in the 1991 animated version:

[BAKER]
And where are you off to, today?

The bookshop. I just finished the most wonderful story about a beanstalk and an ogre and a—

Someone has deliberately foregrounded the Romeo and Juliet narrative in the live-action Beauty and the Beast. Was it to make the live-action Belle more mature, at least in her choice of reading matter? Was it to bring a narrative about a man and a woman forbidden to marry each other by their parents into the film?
Links: The Film at IMDB.

No need to be sorry because you're correct.