A Single Macbeth Reference in Beauty and the Beast 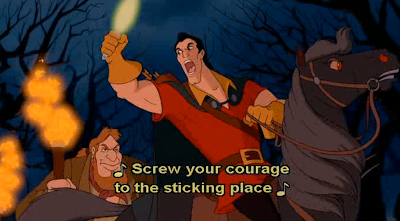 In the big fight song ("The Mob Song"), he uses a line that Lady Macbeth used under similarly disheartening circumstances: "Screw your courage to the sticking point."

The image above shows and tells it all!
Links: The Film at IMDB.

Oh now I *know* you didn't just discover that one, did you?

My kids were way to young to notice it then but these days I get a kick out of pointing out the random bits of Shakespeare they hear every day, like this one (the song's in one of their playlists).

Then again I probably start to sound like Clark Griswold on his European Vacation ("Look kids, Big Ben! Parliament!") Only in my house it's "Shakespeare, kids! Macbeth!"

I calls 'em like I sees 'em, and, furthermore, I calls 'em when I sees 'em—even if that means I get to them four years later than truer, more vigilant Shakespeare Geeks!

That is so crazy! I never caught that before. Obviously, I'm going to have to reread Macbeth and rewatch Beauty and the Beast. What a delightful assignment, to be sure :):):)

There is actually another Shakespeare reference in the "extended" DVD version--during the "Human Again" sequence, Belle is reading the end of "Romeo and Juliet" to the Beast. ("Never was a tale of more woe ...") He asks her to read it again, and she says for him to read it to her; at this point, it becomes clear he has trouble reading because, as he says, it has been a long time. Belle offers to help him, and he starts off at the beginning of the play ("Two households" -- he mispronounces two, and she gently corrects him).

That restored Romeo and Juliet reference actually makes sense, too, when you consider there is a "balcony" scene at the end of the film, with Beast climbing to Belle (just before he is stabbed).

Thank you, Padge! That is extremely interesting. I'll be searching for that DVD!