Book Note: By the Pricking of my Thumbs 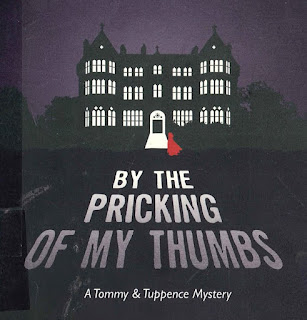 Christie, Agatha. By the Pricking of my Thumbs: A Tommy and Tuppence Mystery. New York: William Morrow, 2012.
If you ever feel like Alice and want to jump down a rabbit hole, start browsing and / or reading your way through this list of works that take their titles from Shakespeare quotes. The works may or may not have anything else to do with Shakespeare–they may simply be parasitical works that find a nifty title in a Shakespeare play.

Agatha Christie's By the Pricking of my Thumbs is along those lines—there's not much in the way of Shakespeare in it . . . and what there is is misquoted.

The novel starts Christie's Tommy and Tuppence—a pair she used for more adventure / spy / thriller types of mysteries. A little way in, Tuppence tries to explain why she thinks there's something odd happening at the nursing home. She says, "I don't quite know . . . .  It's like the fairy stories. By the pricking of my thumbs—Something evil this way comes" (55).

"Evil" is a fairly common substitution in that quote, but "wicked" is the word Shakespeare used. In this case, it's not a question of a difference between a quarto and the folio editions—no quarto of Macbeth exists. And Macbeth is not quite a fairy story.

All the same, let's let Dame Agatha put the misquoted line in the mouth of her character. And I'll give you the rest of the context of the quote as well.  Enjoy! 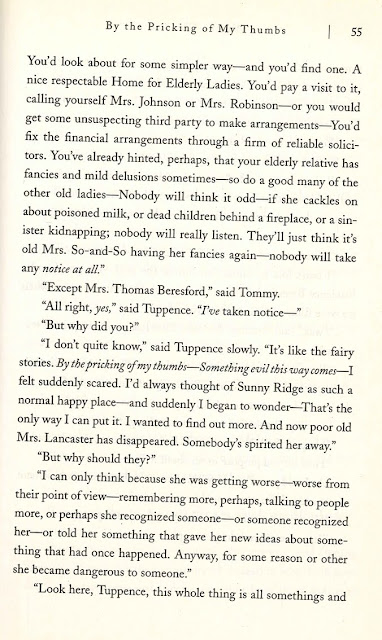