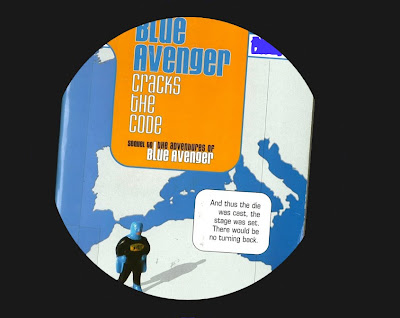 Howe, Norma. Blue Avenger Cracks the Code. New York: HarperTempest, 2000.
I've been doing some work on the authorship question in my copious free time, partly in preparation for the questions that are sure to follow the release of the film Anonymous (for which, q.v.) and partly to prepare for a possible public lecture.

In the course of doing so, another Oxfordian young adult book came to my attention (the first one I encountered was Elise Broach's Shakespeare's Secret—for which, q.v.). The book is titled Blue Avenger Cracks the Code, and, for the most part, it's an interesting, quirky book about odd, mischievous characters. It's the kind of book I would have enjoyed in seventh grade.

And it would still be enjoyable . . . if it weren't for the heavy-handed anti-Stratfordian bias that pervades the text. I don't have time to address all the erroneous and misleading statements in the book, but I do want to take one as a case-in-point in unreliable logic—one that is, I'm afraid, quite typical of the anti-Stratfordians in general and of the Oxfordians in particular. 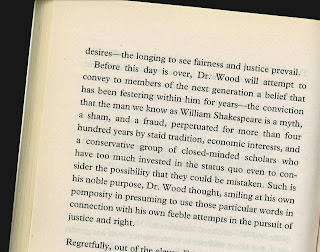 Blue, the main character, is introduced to the Oxfordian position by a disgruntled teacher with an inferiority complex and a last name that might be synonymous with "crazy" (I can't decide if Dr. Wood's name is a deliberate and clever play on J. Thomas Looney's or not). Because he tends toward the rebellious, Blue immediately and uncritically accepts the idea. Through a series of adventures (some of which roughly parallel plot points in The Merchant of Venice), Blue ends up in Venice, where he continues to investigate the authorship question.

One point that Blue obsesses on is the name "Gobbo." It's the surname of a family in The Merchant of Venice, and it's also part of the name of a sculpture in Venice. Here's the way Blue puts it in the novel (complete with the faulty logic that I'll examine below):

Two minor characters in The Merchant of Venice have the surname "Gobbo." They are Launcelot Gobbo, a servant first to Shylock and later to Bassanio, and his father, "Old Gobbo." Just north of the Rialto Bridge in Venice is a crouching stone figure sculpted in 1541 and known as the Gobbo of the Rialto. Edward de Vere no doubt became familiar with his figure when he was in Venice in the year 1575, but it is hardly likely that some "traveler" could have mentioned his obscure fact to William Shakespeare, and that he would subsequently use it in this play. (350)

Other possibilities for the characters' names exist, and they ought to be considered. The Arden edition of the play (edited by John Russell Brown), which may have some authority to speak on the issue, gives this footnote to the name:

GOBBO] In Q and F, this form occurs only in a stage direction and speech prefixes for Old Gobbo; in the dialogue, the form "Iobbe" is used (II.ii.3ff.) which is either a misreading of Gobbo, or an Italianized form of Job (cf. Introduction, p. xxii).

The introduction talks about contemporary and near-contemporary uses of the word "Gobbo" as it tries to date the play; in that section, it concludes that Shakespeare intended for the characters to be named Iobbe and not Gobbo, neatly avoiding the issue.

But even if Gobbo is the intended name, the argument above is still illogical. There may be no connection between the statue and the characters.

This takes us back to a larger assumption—one made by nearly all the anti-Stratfordians. If something is in a play, its author must have experienced that thing at firsthand. The playwright cannot get information from books, other people, reports, random gossip, or any other source: it must be firsthand experience. And that larger assumption just doesn't hold up. If it did, Shakespeare would have had to be—by his own experience—a peasant, a soldier, a sailor, an aristocrat, a witch (three separate witches, really), an elderly king dividing his kingdom in three parts, a friar or two, a shrew, a fratricide, and the Queen of Egypt. There's really no reason why he couldn't have heard from a traveller of a statue called The Gobbo of the Rialto and decided to use it in the play. That's one of the things good authors do—they keep their ears open and transform everything they encounter, however they encounter it, into magnificent literature.

One last crucial point is made in the "Author's Final Note: A Tribute to Charlton Ogburn." Norma Howe writes, "One thing is certain: until some definitive proof is found, the Stratfordians and Oxfordians will continue to do battle" (358). That's not quite the right way to put it. It's not a question of definitive proof; it's a question of what is accepted as proof. Stratfordians have a very strict and rigorous idea of proof. Anti-Stratfordians do not acknowledge the Stratfordians' proof as proof. Until the Oxfordians agree to accept certain kinds of evidence (firsthand accounts, published documents, government records, financial transactions, et cetera) as evidence, they will continue to fight a battle that has already been lost. 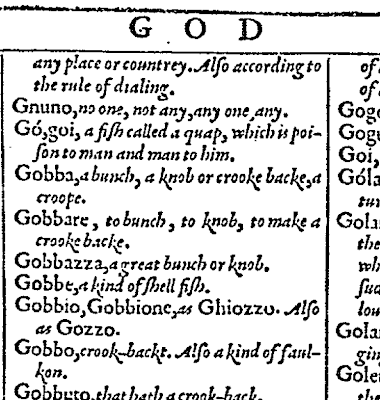 Note: While preparing this post, I noted and then dismissed the appearance of the word "Gobbo" on page 152 of John Florio's 1598 Italian Dictionary A World of Words (you can see the word in its context to the right or you can download the dictionary in its entirety). While its appearance there indicates that English-speaking people were aware (or could be made aware) of the word and its meaning in 1598, Shakespeare probably did not consult the volume before composing his play.

I mention this as a note because Scott McCrea, in his The Case for Shakespeare: The End of the Authorship Question uses it in his section on the Gobbo issue. He suggests—though he doesn't actually say—that Shakespeare could have found the word in Florio's dictionary.


. . . the word "gobbo"was Italian for hunchback. The Author did not have to go to Italy to discover it; it was even collected in John Florio's 1598 Italian dictionary, World of Words as meaning "crook-backed." (74)

Since the absolute terminus ad quem for the play's composition is 7 September 1598 (when Francis Meres mentions it in his Palladis Tamia) and a more probable terminus ad quem is 22 July 1598 (with its entry in the Stationers' Register—see the Arden edition of the play (ed. John Russell Brown) for this information—the probability is that Shakespeare did not have access to Florio's dictionary when he composed The Merchant of Venice. I ought to note, to be absolutely fair, that the first quarto of The Merchant of Venice wasn't printed until 1600, and the late date of its printing gives Shakespeare time, during revisions to the play, to look up "Gobbo" in A World of Words and appropriate it for the names of two minor characters. But that does seem unnecessary complicated.