Did Christopher Marlowe Write the Plays Attributed to William Shakespeare? 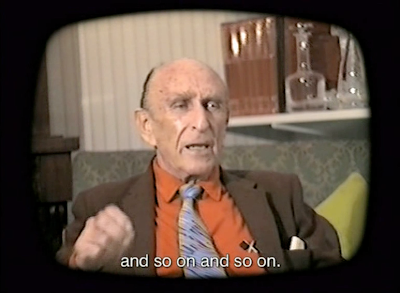 The Oxfordians have a hard enough time with the 1604 death of their candidate for the authorship of the plays attributed to Shakespeare. They have to explain how roughly a dozen plays came to be written—written, not just performed or published—after the Earl of Oxford's death. The Marlovians—those who think Christopher Marlowe wrote the plays attributed to Shakespeare—have an even more difficult task. Marlowe died in 1593, before all but a dozen (to be generous) of Shakespeare's plays were written.

Calvin Hoffman's The Murder of the Man who was Shakespeare (New York: J. Messner, 1955) is primarily responsible for the theory. Michael Rubbo's Much Ado About Something perpetuates it—although in an interesting, well-direted, well-shot manner. I'd like to take a look at two brief segments.

The first is an attempt at comparative analysis—an examination of passages in Shakespeare that are similar to passages in Marlowe:


Let me call your attention to one line: "Some of Calvin's parallelisms are pretty far-fetched, but he does have thirty pages of them."

First, that's not much of a reason to accept the conclusion. It's like saying, "Oh, yes, some of the chicken is spoiled, but we do have thirty buckets of it" or "Most of the iPods we're selling are broken, but we do have a large number of them!" Quantity of evidence is important, but the quality of that evidence is even more important. The largest pile of misleading, misconstrued, or misinterpreted evidence in the world is still misleading, misconstrued, or misinterpreted evidence.

Second, the words of Christopher Marlowe's plays weren't secret. They were part of the public record. If a phrase from a late play is similar to a Marlowe play, we don't need to posit that the late play was written by the author of the earlier play. By that line of reasoning, the author of the plays attributed to Shakespeare was the translator of the Geneva Bible—many phrases from the plays come from the earlier work. I'm afraid it just doesn't make sense. The theatre of Shakespeare's day was vibrantly collaborative, and playwrights would borrow from, parody, echo, and even steal from each other.

The last two quotes demonstrate those parallelisms that are "pretty far-fetched." They both have a tiger in them, and they both have a bitter, vindictive tone—but that's about it.

The other clip has to do with the burial register:


I recently addressed this issue in my post entitled "The Oxfordian Conspiracy" (for which, q.v.). For the most part, I'll reproduce what I said there.

This woman, both now and as a schoolgirl, presumes that the burial record ought to say “William Shakespeare, playwright.” I’m not sure why. Shakespeare himself was clearly not around to object to whatever the clerk happened to write. The clerk may have been bound by conventions of data entry for his time. Anne might have been too distraught to say, “Please make the record say either ‘poet’ or ‘dramatist’ or ‘author’ or ‘playwright’—Will would have wanted it that way.” Or she may have been angry enough at his having spent most of his working life away from her in London to say, “Make it say ‘gent.’ That’ll fix him. Second-best bed, indeed!”

I’ve been interested enough in the question to do some research—and to ask some marvelous librarians to do some research for me. I’ve tried to track down the burial records of contemporary poets to see if any one of them says, “Ben Jonson, poet” or “Thomas Middleton, poet.” But I’ve been unable to do so. So many burial records have been lost—Sidney’s isn’t there, Jonson’s isn’t there, Middleton was buried at St. Mary Newington Butts Churchyard, but we haven’t been able to track down the parish register yet. [Update: We have, at long last, tracked down Middleton's burial record!] It seems that we’re quite fortunate to have a burial record at all for William Shakespeare, and we should be profoundly grateful that it survived!


I think the disappointment at the “gent.” must just be a case of modern expectations being let down by renaissance conventions. We would like it to read “Will. Shakespeare, poet” because that’s how we know him. But the parish register may have been far more concerned with official records—getting his social status down on paper—than on profession or legacy. And the idea of anyone in the 1600s being "only a gent." shows another misunderstanding. Being a gent. was enormously significant, particularly for someone whose father had not been a gent. We may not like the idea that so much time, energy, and emotion was put into social standing, but it was, and the word "gent." in the burial record indicates particularly high social standing. And that can't be shrugged away.

Additional research led me back to the massive and fabulous two-volume set entitled The Shakespeare Documents: Facsimiles, Transliterations, Translations, and Commentary (ed. and trans. B. Roland Lewis, Stanford: Stanford University Press, 1940). In volume 2, Lewis has this to say on the subject:

It is to be noted that the entry very definitely accords Shakespeare social rating. "Gent," "Mr," "Knt," were the social ratings ordinarily used in Parish Registers; virtually never was there any reference to such matters as literary or dramatic prowess. (525)

Of course, "virtually never" isn't quite the same as "never." I wish Lewis had provided the exception(s)—if he knew of any and isn't simply avoiding an unqualified claim—but he does not. I apologize to the magnificent librarians helping me on this subject: The search continues.

Marlovians and Oxfordians alike find something lacking in the man from Stratford. But the fault is not in Shakespeare but in themselves that they are conspirators.
Links: The Film at Frontline.


Click below to purchase the film
and Calvin Hoffman's book from amazon.com
(and to support Bardfilm as you do so).