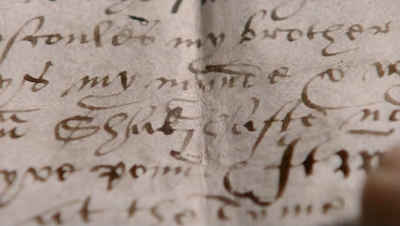 In Search of Shakespeare. Dir. David Wallace. Perf. Michael Wood. 2004. DVD. PBS, 2004.
In Search of Shakespeare is a lengthy, well-researched, interestingly-presented documentary. But it needs to be taken with a grain of salt because of a flaw too often evident in Shakespeare scholarship even at the highest levels. It steps from the speculative to the certain far too easily and with far too little indication to its viewers that it's doing so.

The documentary takes every opportunity to posit a Catholic Shakespeare. The approach it takes is extremely heavy-handed on this issue. Indeed, a better title for it might be In Search of Shakespeare's Catholicism. There's nothing wrong with attempting to make the case that Shakespeare was a crypto-Catholic, but the case for that—or for the argument that Shakespeare was a protestant, an atheist, or an agnostic—must be made fairly.

In the clip below, In Search of Shakespeare examines the theory that Shakespeare spent part of 1580 and 1581 with the Hoghton family in Lancashire. David Wallace, our guide, examines the main evidence put forward for Shakespeare's being in the household: A will, dated 3 August 1581, that reads, in part, "I most heartily require the said Sir Thomas to be friendly unto Fulk Gyllome and William Shakeshaft."

Notice, as you watch, what is done with this evidence. Here's the progression:


There's quite a leap between 1 and 2 above—and the documentary fails to notice the large number of people with the surname "Shakeshaft" living in the district or to ponder how effective the alias "William Shakeshaft" would be for a man whose actual name was "William Shakespeare"—but we progress to point 3 without a backward glance. Point 3 already assumes that Shakeshaft is Shakespeare and that we must now move on to find the reason he's taken on an alias.

The documentary has found its Catholic ground, so it trudges along, following it doggedly. By the time we get to point 7, we (unless we're paying careful attention) forget that we started out with a speculation and we're now in the realm of definite and certain fact: He came to Houghton (that's been established); was John Cottam the reason? It's cleverly done, but it really isn't fair to the evidence. Here's the clip:

In addition to being misleading in its logic, it fails to explain the source for Kit Beeston's statement. Around 1681, John Aubrey collected some scraps of information about Shakespeare (as well as other famous personages). He left his notes unpublished at his death; they were finally edited and published in 1898 as his Brief Lives. His biographical notes on Shakespeare run to a page and a half in the edition I have before me. Aubrey's biography of Shakespeare is a brief life indeed. He places Shakespeare in London in 1582 (at the age of eighteen), and, near the end, says "he had been in his younger yeares [sic] a schoolmaster in the countrey [sic]" (276). Samuel Schoenbaum (for which, q.v.) says that "Aubrey sought out and questioned old Beeston in his house at Hoglane in Shoreditch" (85). The idea that Shakespeare was a teacher may have been gathered on that occasion.

But Aubrey also tells us that Shakespeare's father was a butcher (he wasn't), that the character of the constable in Midsummer Night's Dream (there isn't one—he may mean Much Ado About Nothing) was based on a man "at Grendon, in Bucks . . . and there was living that Constable about 1642" (275), and that Thomas Shadwell "is counted the best Comoedian [sic] we have now" (276)—which may have been true but which is also regrettable. In short, not everything Aubrey says is accurate, and that seems to be an important part of the "Aubrey says that Beeston said" evidence. Not to qualify the evidence in this instance is remarkably unscholarly.

“Was it here at Holton?” is the question that concludes this clip. The answer might be “Well, I suppose it’s conceivable, though it’s pretty unlikely.” Instead, the film implies a hearty “Yes!” And that's not surprising. The conclusion seems to have been reached beforehand, and the evidence is manipulated to fit the conclusion rather than a conclusion being drawn from the evidence.

In Search of Shakespeare is in good company. Stephen Greenblatt, who also wishes to establish a crypto-Catholic Shakespeare, does the same in his biography of Shakespeare Will in the World. He starts with "might have," but he soon switches to "would have":


This precocious adolescent—recommended by Cottam as intelligent, reasonably well educated, discreet, and securely Catholic—would have come north in 1580 as schoolmaster. The terms of the will suggest that he soon began to perform, at first probably only recreationally and then with increasing seriousness, with the players that Alexander Hoghton kept. (104)

Just a bit later, he returns to the conditional: “Will’s life, if he actually sojourned in the north . . .” (105), but it's a bit too little too late. We've already been presented with speculation as certain fact.

Maintaining rigorous scholarly methods is vitally important. The history of Shakespeare scholarship is littered with "facts" that started out as speculation. These "facts" become so intertwined with factual facts—especially in the public imagination—that they are almost impossible to eradicate. Speculation is fine, but it must be presented as speculation rather than as certainty.

Finally, there is some weight to oral tradition in any history. The Hoghton and Hesketh families both have oral histories about William in their houses.