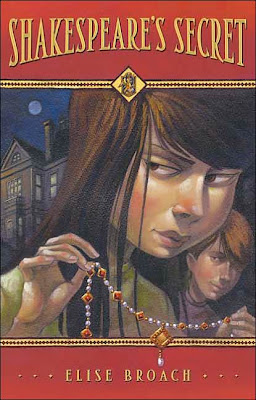 Broach, Elise. Shakespeare's Secret. New York: Square Fish, 2007.
Although I'm still partial to King of Shadows (for which, q.v.), I recently read a good Shakespeare-related novel for young adults. If you're an anti-Stratfordian, you'll like it. It's very heavy on the Oxfordian side. Of course, if you're an Oxfordian, you probably don't need any more encouragement, and you really ought to take a very careful look at the logic of your argument and the data available that will undermine your position.

Apart from the usual presentation of the anti-Stratfordian position (which itself is erroneous, illogical, and irrational in places), Shakespeare's Secret is very well written. A diamond missing from a sixteenth-century broach (was it stolen by someone who knew it was there . . . or by its own owner, who collected the insurance money?) is at the center of this adventure story. Its protagonist is named Hero (her older sister is named Beatrice), and her father is an amiable Shakespeare scholar (though one who has imbibed too much of the Oxfordian position). It's a good book.

However, I can't recommend it without reservation—because a much better book is readily-available. Fortunately, it's by the same author. 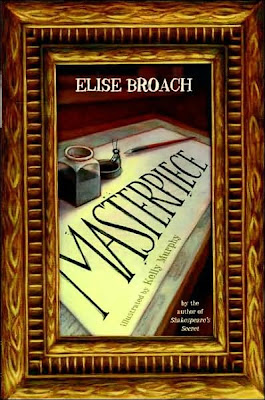 Broach, Elsie. Masterpiece. Illus. Kelly Murphy. New York: Henry Holt, 2008.
Masterpiece is brilliant. It's not Shakespeare-related, but it should be recognized as marvelous nonetheless. It's the story of a boy and a beetle, and the beetle turns out to be a natural genius in pen-and-ink sketches. Eventually, the boy (they think he's doing the drawing) is commissioned to forge a drawing by Albrecht Dürer so that the art thieves can steal it instead of the genuine drawing. If I say any more, I'll give away some marvelous things. You should read this book at least—and you should give it to everyone you know, especially those with children. Even those as young as six or seven will be delighted to have you read either of these books out loud.