Shakespeare in The King's Speech 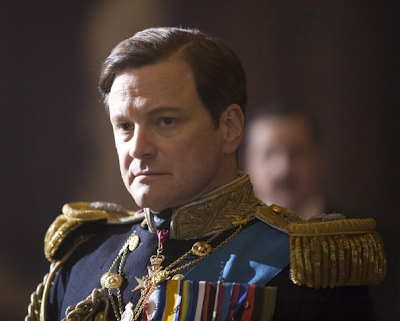 I just watched a film that has even more Shakespeare allusions than it has Corgies. The King's Speech is currently in theatres; it tells the story of England's King George VI's attempts to overcome a speech impediment before and after he assumed the throne. It also contains allusions to Othello, Hamlet, The Tempest, Macbeth (one character mentions "The Scottish Play"), King Lear (possibly), and, most notably, Richard III.

Lionel Logue, the speech therapist with an unorthodox methodology, offers us the first bit of Shakespeare, delivering the line "Poor and content is rich and rich enough" from Othello (III.iii.195). He offers the comment to the Duchess of York (who has introduced herself as Mrs. Johnson) as an unapologetic apology on the simplicity (i.e., dinginess) of his office. It's a small line, but it does establish Logue's character as a man educated in and apt to use the works of Shakespeare in his everyday conversation.


The next use the film makes of Shakespeare is much more significant. Lionel Logue, we discover, longs to act. We see him at an audition at which it is almost immediately evident—something about the way he holds his arm makes us think that he's about to make it act withered—that he's going to give us the opening of Richard III:


Now is the winter of our discontent
Made glorious summer by this sun of York;
And all the clouds that lour'd upon our house
In the deep bosom of the ocean buried.
Now are our brows bound . . . . (I.i.1-5)

. . . and that's about as far as he gets before the audition committee interrupts with a curt "Thank you!" They make a bit of fun of Logue's slight Australian accent, and, more importantly, they say something to the effect of "You don't look like a man suffering from a deformity who is scheming to be King of England." [Update: The line, upon review, turns out to be "I'm not hearing the cries of a deformed creature yearning to be king."] In that comment—and in Richard's famous opening lines—the groundwork of a theme involving George VI as something of an anti-Richard is established.


As part of his attempt to eliminate the future King's stammer, the speech therapist puts earphones playing loud classical music on Bertie (Albert is one of the Duke of York's names; his family—and Mr. Logue—call him Bertie) and asks him to recite Hamlet's most famous siloloquy. Our point of view is Bertie's: we hear the loud music and a very muffled impression of the first six words. Then Logue turns up the music so that that is all we hear, and we see only his Royal Highness's head bobbing as he delivers several more lines (the microphone is cleverly placed to block our view of his mouth). Although the Duke becomes too frustrated to continue, he accepts the record Logue has just made as a souvenir of his visit. When he listens to it later, he, his wife, and the members of the audience all realize that it's quite a passable version of the soliloquy.


A few scenes later, we are presented with the speech therapist in his office with two of his children. One of them asks if he up for a game of Shakes (I think that's what he called it—my memory may not be serving me well on that point). The game is presented as one well-known to the family. Logue leaves the room and re-enters, reciting something from one of the plays; the boys see who can be first to guess where it's from. In this instance, it's a speech Caliban gives in The Tempest:


Be not afeard; the isle is full of noises,
Sounds and sweet airs, that give delight and hurt not.
Sometimes a thousand twangling instruments
Will hum about mine ears, and sometime voices
That, if I then had waked after long sleep,
Will make me sleep again: and then, in dreaming,
The clouds methought would open and show riches
Ready to drop upon me that, when I waked,
I cried to dream again. (III.ii.138-46)

When he went out of the room, the speech therapist stuffed a small pillow or a jacket under his sweater, giving himself a hunch. He seems to want to play Caliban as slightly deformed. The specific nature of that deformity ties Caliban to Richard III, underscoring—even with this speech and this character—the inverse relationship George VI has to Richard III.


Apart from a brief "trippingly on the tongue" (Hamlet, III.ii.2) spoken, of course, by the speech therapist (I won't provide a clip of that one; it takes place while the two are realizing that Bertie doesn't stammer while swearing), and a brief scene of the very confused old King George V signing away some portion of his authority that I'd like to think is an allusion to King Lear but that I freely admit may be nothing of the kind, I didn't catch (or I don't remember) any other direct references to Shakespeare in the film.

But the allusions to Richard III continue, and they are exactly of the right sort. Too often, quotations from or allusions to Shakespeare are thrown in to give a bit of tone to a movie. In The King's Speech, they are deeply integrated into the film's weltanschauung: The film develops George VI as the antithesis of Richard III.

Late in the film, when Bertie's brother David (King Edward VIII to the rest of us) is considering marrying the twice-married, once- (and, soon to be twice-) divorced Mrs. Simpson, Mr. Logue tells Bertie, "You could be King. You can do it" (please note that this is not necessarily a direct quote—my memory is notoriously fallible, and I've only seen the film once). Bertie takes this as near-treasonous temptation and rejects it. The self-tempted, self-deceived Richard III neither needs nor would reject an external temptation of this sort, but the future George VI does.

Later still, when Bertie and Lionel are having an argument before Bertie's coronation ceremony, Bertie turns and is shocked to find Lionel sitting in the throne itself. The rest of the scene is astonishingly funny—but the image shows George VI exactly what he fears to find in himself: A King like Richard III on the throne of England. George VI is presented as a man suffering from a deformity (although "deformity" may be too strong a word to describe his speech impediment) who is reluctantly going to be King of England.

The uses to which Shakespeare—and, particularly, Richard III—is put in this film are complicated, deep, and interesting. And the rest of the film is really quite marvelous as well.

I had been thinking about seeing this film...this blog post may have convinced be to definitely do so this weekend. Thank you.

Absolutely, Sharky. This post concentrates on the Shakespeare side of things, but the entire film is much to be admired.

Discursive and elegant.
The king's speech does not seem as attractive but its routing. The bonds of historical script allow one to skip the analysis of the idea. Beyond the script, the sympathy for the characters border on perfection and came on as battering rams.

Nature supernally British humor makes the key in the development of the foundation. But the essence of the film lies in the performances, no doubt.

Firth is again impressive after "A Single Man," is who sets the pace and pattern of the film, and accompanied by two large and Rush and Bonham Carter.

Unforgivable viewing with dubbing, the original voices do so much for your sake and for the very being of the tape. The pace is amazing, humor, benevolent. The address is modern classical and interestingly in some planes.

Great movie that Colin Firth has finally be rewarded as it deserves.

A very good movie, I believe that it was happening to be the classic one. Nobody to get lost it

A movie with a few actors of 10, magnficos. Remain with desire of more.

I've seen the film 3x now and it took the third viewing to capture the "dream" sequence where Loebe and his two sons are interacting Shakes as they said..a brilliant film that only gets better w each viewing.

One of the greatest writer is Shakespeare. His writings and personality inspire a lot of people.