Will Someone Please Revive this Play? 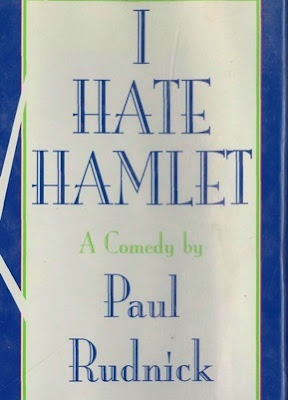 The play is about a Hollywood television actor who moves to New York and agrees to play Hamlet for Shakespeare in the Park. He moves into the former apartment of the great Shakespearean actor John Barrymore.

Eventually, Barrymore’s ghost shows up to coach Andrew Rally (that’s the television actor’s name) on playing Hamlet. The whole thing is remarkably clever and funny. It reads very well, but I’m sure it would perform better.

Let me give you two marvelous exchanges.

First up, the Hollywood agent reveals how shallow and superficial television and film viewing can be.


FELICIA: I hope he’s good. Although, you know, with Shakespeare—how can you tell?

GARY: Exactly. I mean, it’s foolproof—maybe, with Shakespeare, there’s no difference betweeen bad and good. And everybody’s afraid to say it. I mean, at the movies, on the tube—either you’re funny or you’re cancelled. You’re good-looking, or you're best-supporting. I mean, you can tell. But Shakespeare—it’s just real hard to tell who’s good, without nudity.

Next, Andrew and the ghost are introduced.

BARRYMORE: Yes. Although my father’s given name was Blythe; he changed it when he became an actor, to avoid embarrassing his family. Your name?

One is worred that his family will be ashamed of him; the other is worried that he will shame an entire people group. And it’s also a nice reversal—not being embarrassed that you have a Jewish heritage . . . being concerned that you’ll embarrass the Jewish people as a whole!


Click below to purchase the play from amazon.com
(and to support Bardfilm as you do so).