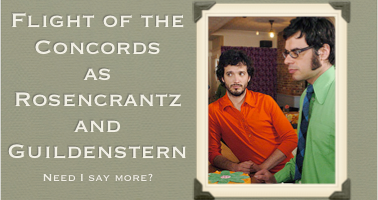 Carey, Andrew. “Hamlet: The Opera.” Shakespearean Screenplay—the Film Pitch and its Accompanying Justification. 1 May 2008.
The sheer volume of grading has kept me from posting to the blog as much as I’d like. It’s overwhelming, if you want to know.

Today, I’ve been thinking of the intriguing casting decision Andrew Carey made in his pitch for a Hamlet opera (really, it seemed more like a rock opera): The guys from Flight of the Conchords as Rosencrantz and Guildenstern.

It just works perfectly, doesn’t it?

[For those who don’t know them, they have the perfect blend of cluelessness and sagacity . . . well, cluelessness, at least . . . for the roles. I’d love to see them in a production of Rosencrantz and Guildenstern are Dead by Tom Soppard.]

Now . . . let’s write some songs for them. What rhymes with “My most honored lord”?