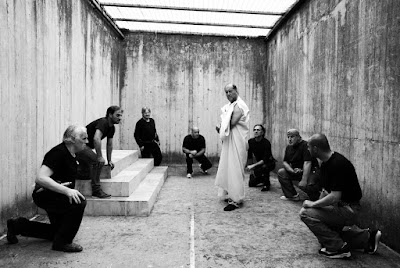 Note: I use the term "Spaghetti Shakespeare" advisedly, knowing that it might seem flippant or insulting; however, this is part of a series (for which, q.v.) that includes Johnny Hamlet, a subset of the recognized genre "Spaghetti Western."

Italian Shakespeare has taken a backseat to other global Shakespeares in my studies, but I'd like to return briefly to one film in particularly.

Caesar Must Die [a.k.a. Cesarè Deve Morire] is something of a "making-of" documentary in a highly-polished, aesthetically-conscious way (which may be another way of saying "somewhat staged"—but not in a negative way). Inmates at a prison in Rome prepare a production of Julius Caesar through a program at the prison.

The film is immensely compelling, especially as we get to know the men behind the characters. The scene with the Soothsayer's first appearance reveals a bit of that. Here, the actors are told to keep their dialects as they put the lines together:


Our knowledge of the play and its characters and the performers and their characters grows throughout the film as we're provided intimations of the tensions between the men who play the roles.

Everyone involved becomes captivated by the production. In this scene, the actors rehearse in a recreation yard. They're putting together the scene where Antony asks permission to present Julius Caesar's body to the public in a funeral. Watch for the interesting frames here:

The layers there are fascinating. Are the guards referring to the character or the man? Is Shakespeare compelling enough to let the guards bend the rules a bit?

In short, Caesar Must Die is a must see film.
Links: The Film at IMDB.