Once Again, They Put the Great in Great River Shakespeare Festival 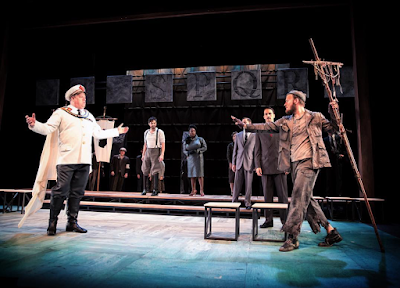 I'm always so moved by the beauty of the GRSF's productions and the skill and depth of the actors that I find it hard to get started with a review. I'm also always a bit rushed because I want to get the word out about the shows as quickly as I can. Bear with me, then, as I provide a few points that struck me about each show.

The costumes, set, and lighting were striking. This Shakespeare Festival puts an incredible amount of thought and work into these elements of the show. After the intermission, the set was littered with letters from Orlando to Rosaline—and the lighting on the backdrop made it take the form of hundreds of letters sewn together. This image (from the GRSF Instagram Page) gives you a sense of the beauty of the sets and costumes: 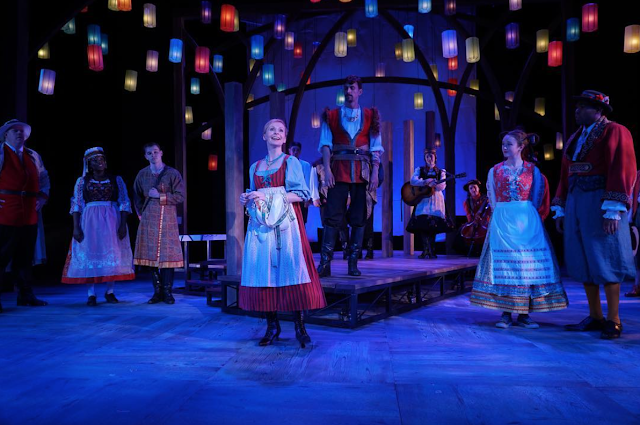 The music was delightful—please notice the musicians in the background of the image above—they were often in the background of the production. All the songs from the play were given new musical settings for this production—and they mostly rode a delightful line between folk and bluegrass. A cello and guitar were the main instruments, but a mandolin made its way in there from time to time as well.

The acting was superb. The Orlando (played brilliantly and energetically by Benjamin Boucvalt) had a light touch that could turn to utter seriousness on a dime—and do so utterly believably. The Rosaline (played energetically and brilliantly by Tarah Flanagan) was utterly fresh and vivacious. One scene that particularly impressed me between the two was the "I would not be cured, youth" scene. I've mostly seen it played smoothly—Rosaline has a plan in mind and unfolds it to Orlando so that he (and the audience) can understand it. In this production, she came up with the plan hesitantly, adding bits as she thought it through—occasionally frustrating Celia (played extremely well by De’Onna Prince) by how unpolished it is. Flanagan is also often able to respond to a difficult line with a brief glance or a pause or a slight movement in a way that brings its meaning home clearly (and often humorously) to the audience. The text of Shakespeare is vitally important in this production—and Flanagan gives us that and much more.

I mention those two actors in particular, but each of the actors brought great weight and depth to the characters they played. Here's a quick image of Touchstone (with Rosaline in the background).  Rob Hancock's Touchstone displayed considerably mastery of the language and of physical humor. His timing could not have been improved upon. 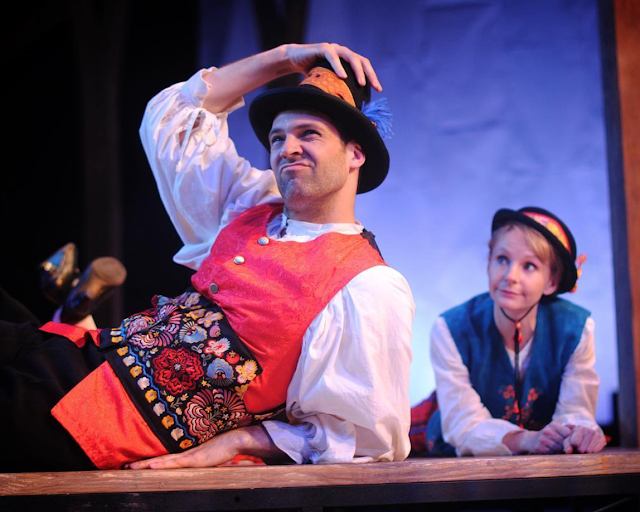 The director had a powerful and intriguing overall vision for the play. Jaques is utterly thrilled and overcome by the fool in the woods—but he soon becomes fraught with melancholy again as he delivers "All the world's a stage." Jaques' "Seven Ages" speech is often seen as a damper on the play (for some thoughts on this, click here). And it does bring things down in this production—but not for long. But the play brings us back down again—and then back up.

Really, I was struck by how this production of the play exhibits a manic depressive personality. We have incredible highs counterbalanced by desperate lows throughout the entire play—until, in the last scene, we generally run up a crescendo of joy to the end.

The Great River Shakespeare Festival Julius Caesar is one of the best I've ever seen.

The production has something of the flavor of the 1937 Julius Caesar directed by Orson Welles that I've written about (in conjunction with the film me and Orson Welles) here. You may be able to see something of that in this image (from the GRSF website) of the conspirators arriving at the Senate:

If you see both Shakespeare productions, you'll start to recognize the incredible breadth that these actors have. The light touch Benjamin Boucvalt gives to his Orlando is traded for a conniving, sarcastic, smooth, and sadistic Cassius. It was hard to remember that the roles were played by the same actor. In this production, Cassius exuded the aroma of Applegate from Damn Yankees. He's subtle and sly, but he's a tempter to make your skin crawl.

Visually, the production is stunning. One member of the audience next to me was struck by how very little color makes its way onto the stage—until the assassination. That makes the blood all the more shocking.

Speaking of the assassination, Zach Curtis plays it (and the rest of his role) very well. It reminded me vividly of Brian Murray's Claudius in the Kevin Klein Hamlet. He's a remarkably good ruler with a trace (but only a trace) of tyranny in him. He's tyrannical tendencies are reduced in this production to complicate Brutus' thought processes and Cassius' temptation. Just before the assassination, he becomes more outrageous ("Yet in the number I do know but one / That unassailable holds on his rank, / Unshaked of motion”), which, for the moment, seems to validate the assassination. But Curtis plays the death to evoke great pity. He crawls down two conference tables, spreading considerable blood about, and dies agonizingly at the end of the second. His body lies there for the rest of the very long scene, making the conspirators look far more like the butchers than the sacrificers Brutus hoped they would be.

John Maltese plays Brutus with great subtlety and thoughtfulness. His consideration of the way to give Rome the best government it can have ("It must be by his death") had unsounded depths. Though the production has generally modern dress (1940s? 1950s?—How do you date a fedora?), I didn't get the impression that any particular politics (other than ancient Roman, of course) was specifically being referenced. But Maltese's consideration of Cassius' temptation brought to mind the recent events in Turkey. Were the leaders of the attempted coup also thinking as deeply about how to make their government great again? As a side note, this is merely one more indication of the continued relevance of Shakespeare in our time.

Maltese's interaction with Portia was also very fine (as was hers with him)—but it does bring to mind one oddity of the production. This production makes Portia particularly pregnant, and I'm not convinced it worked. It stood out without clear motivation. I imagine it makes Portia's death more poignant (especially to Brutus), but it wasn't a piece with the whole production.

The Soothsayer—played by Ted Kitterman—was intriguing. He's pictured on the first image of this post. He's portrayed as a veteran of one of Caesar's past wars, and he's not altogether there. His interaction with Caesar had a poignancy to it—as if Caesar recognized some complicity in his current state. He also delivers Artemidorus' lines, which gives him more than just supernatural knowledge of why the Ides are to be avoided—he has collected names and numbers. It's an interesting choice, though it does tend to bring him down to more of a mundane plane.

The second half of As You Like It is better than its first; the first half of Julius Caesar is better than its second. But this production manages to keep our interest and attention through to the end. Perhaps that it helped by the unusual timing of the intermission—it's right after the assignation and right before the funeral orations. In between, the set change shows the effects of Caesar's death by showing cracks in the giant S.P.Q.R. above the stage: 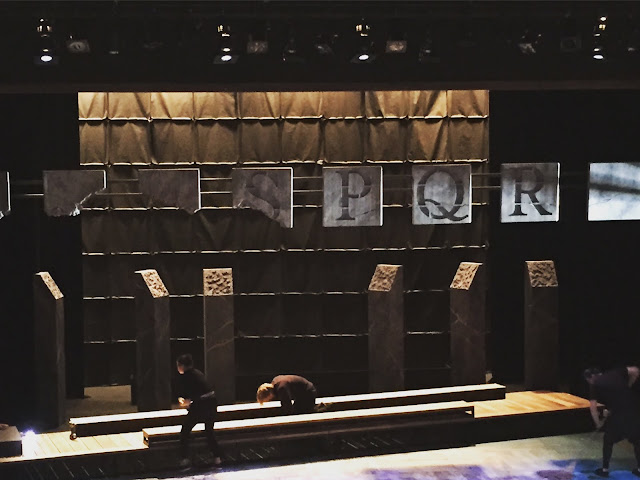 Caesar keeps reappearing—accompanied by subtle red background lighting and barely-distinguishable sound effects—and we watch the decline and fall of Brutus with interest.

Both Shakespeare plays were, once again, utterly remarkable.  The GRSF is a diamond of the purest cut—unutterably beautiful and complex.

The GRSF is also putting on a new musical called Georama this year. I've heard great things about it, but I wasn't able to see it myself.

The 2016 season runs through the end of July—so plan your trip immediately!
Links:  The Great River Shakespeare Festival.
Copyright 2008-2039 by kj at 7:05 AM