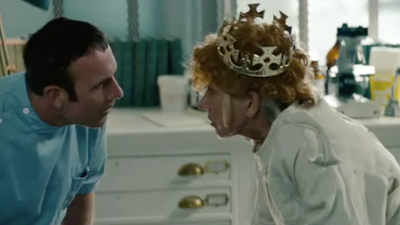 At one point in RED 2, the good guys have to break in to a secret psychiatric facility located somewhere near the Tower of London. How would a group of retired spies, Helen Mirren among them, do so? Let's take a look:


There you have it--pretend to be an insane woman who thinks she's the Queen of England—but not the current queen. With a nice red wig and a convincing sense of paranoia (one Queen Elizabeth I might have shared at some points in her life?), our spy successfully infiltrates the facility, quoting, as she does so, from 2 Henry IV. The line is spoken by Henry IV himself in the dark middle of the play.

I enjoy the layers in the scene. A retired spy pretends to be Queen Elizabeth I and quotes what Shakespeare thought Henry IV might have said while crying out for Cecil; complaining about Popish plots and Mary, Queen of Scots; and begging not to be sent to the Tower—and then making an off-hand remark about how Bette Davis played her Elizabeth I.
Links: The Film at IMDb.