New Clip of Meryl Streep in The Taming of the Shrew 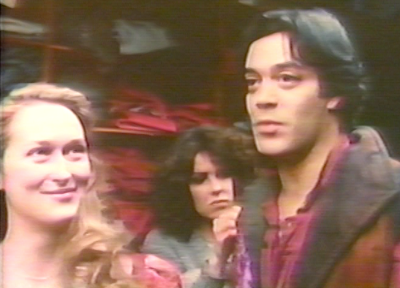 Kiss me, Petruchio. Dir. Christopher Dixon. Perf. Meryl Streep and Raul Julia. 1981. Videocassette. Films, Inc., 1983.
Reading Act IV, scene iii of The Taming of the Shrew can be a tedious business. It consists mainly of Petruchio criticizing hats and gowns that are presented to Katherine. There are some humorous moments, but the main note it strikes—again, while reading the scene—is one of monotonous repetition.

That is what makes Christopher Dixon's direction of Meryl Streep and Raul Julia in the scene so impressive. In this production, the arguments about hats and gowns are mere background chatter—we're meant to be paying attention to Katherine and Petruchio all the while.

The scene, particularly as enacted by Meryl Streep and Raul Julia, becomes a key scene for the development of Katherine, of Petruchio (somewhat surprisingly), and of the two of them together. The way Katherine ponders Petruchio and Petruchio's actions becomes an essential element in the marriage of true minds that the play presents. This production marks IV.iii.155 ("Well, sir, in brief, the gown is not for me") as an enormous and consequential turing point:


Though Katherine has no line anywhere near IV.iii.155, her passing the gown to the tailor becomes one of the most significant actions in the play. Marvelous.
Links: The Film at IMDB.

Note: Three other clips of this production are available on this blog: The First Clip, The Second Clip, and The Third Clip.
Copyright 2008-2039 by kj at 7:17 AM

Thank you so much for sharing these clips from Taming of the Shrew. I love Meryl Streep & Raul Julia and read the play and I think no other actors could have done this better than them, well at least for me :)

You're most welcome! I imagine that we all wish that a DVD of this production (with other Streep Shakespeareana) would be released.