Baby Shakespeare may be even more Lost than Perdita 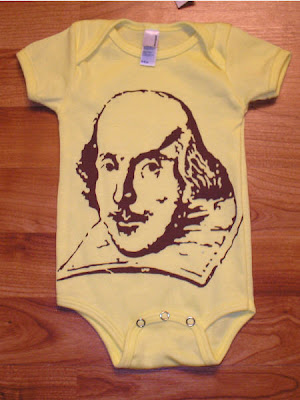 Baby Shakespeare. N.d. Perf. Aspen Clark and Sierra Clark. 2002. DVD. Disney, 2002.
I've always loathed the Baby Einstein series on principle. Real life and real interaction seem so much more three-dimensional and interesting than videos of spinning toys. The reason for this is primarily because they are!

It seems that the people behind the videos are acknowledging that they made claims that were too extravagant, and, as this article explains, they're offering refunds to parents who are willing to admit that their children are dimwitted. Or that they didn't turn into geniuses from watching videos. I suppose marketing the DVD under the name Baby Couch Potato didn't seem like a good idea, but the "genius" claim has gotten them in some trouble.

I grabbed the video from our library and watched it—well, mostly listened to it while grading papers—and there's very little Shakespeare there. At one point, the camera pans over some flowers, and we hear one of Oberon's most lyrical speeches:


I know a bank where the wild thyme blows,
Where oxlips and the nodding violet grows,
Quite over-canopied with luscious woodbine,
With sweet musk-roses and with eglantine:
There sleeps Titania sometime of the night,
Lull'd in these flowers with dances and delight. (II.i.249-54)


Out of all this, we can at least say that we're virtually certain that Shakespeare did not obtain his genius by being plunked down as a baby to watch videos of spinning toys. We here at Bardfilm shudder to think of it.

Oh, there's one more thing—you can buy the onesie pictured above if you so desire! (The shop is not affiliated with Bardfilm.)

I also should mention that I couldn't resist an allusion to a lost baby in the title of this post. The reference is to The Winter's Tale.
Links: The Film at IMDB.

Yeah, my kids were all the perfect age right in the middle of the Baby Genius hype. I can't count the number of people who, knowing me, would say "Oh well and of course you have the Baby Shakespeare." I'd explain to each of them just how little Shakespeare was actually in it.

Who is the bad guy here, the business woman who spotted the "Mozart Placebo Effect" and turned it into a Disney buyout (read: $$$$), or the millions of parents who spotted an apparently legitimate excuse to plop their kid down in front of the tv all day long instead of interacting with them?

My vote would be for both! I don't think there's a shortage of bad guys here--but I imagine that those who were genuinely duped (the dupees) are less bad than those who duped them (the dupers).

If people have to plunk their little ones down in front of a video, why not make it Shakespeare: The Animated Tales? There are, admittedly, fewer spinning toys, but there's much more beauty of language and plot.

Better yet, people could enact the plays themselves! And listen to Mozart while doing so—there's no harm in that, is there?