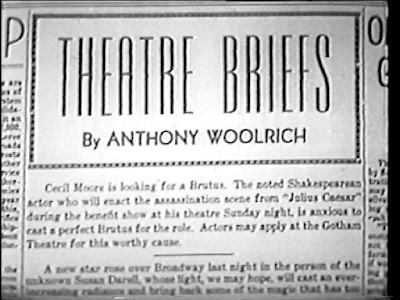 The Phantom of 42nd Street. Dir. Albert Herman. Perf. Dave O'Brien, Kay Aldridge, Alan Mowbray, Frank Jenks, and Vera Marshe. 1945. DVD. Alpha Video, 2004.
One of the most thrilling categories of Shakespearean derivatives is the "Mirror Movie" mentioned in Kenneth S. Rothwell's classification system. In that type of derivative, characters in a film are putting on a Shakespeare play—and, most frequently, the events of their lives reflect or are reflected in the play.

The Phantom of 42nd Street isn't, on the whole, remarkable. It's a more-or-less typical B movie in the slightly-hardboiled detective / slightly-film noir vein. But some of the bit parts steal the show.

The cabbie, for example, is named "Romeo," but we don't know why until he accurately cites a quotation from Hamlet (and smug he looks about it, too!) and tells us that he was brought up on Shakespeare. The female bit player finally lands a line (not one actually in Shakespeare) to everyone's great amusement.

For the most part, though, the play settles down to a plot involving putting on a production of Julius Caesar to catch a murderer.


In the scene, we get a bit of the beginning of Act II, scene ii of Julius Caesar, including the "Cowards die" speech alluded to in The Music Man:


Cowards die many times before their deaths;
The valiant never taste of death but once.
Of all the wonders that I yet have heard.
It seems to me most strange that men should fear;
Seeing that death, a necessary end,
Will come when it will come. (II.ii.32-37)

You may notice that the actors playing the detective / reporter and the cabbie play amateur actors well. The detective, as Decius, needs to project, and he prompts the cabbie (who is playing Casca) with what amounts to a nonce-line: "Speak of hands for me" instead of "Speak, hands, for me" (III.i.76). The line that should follow, the most famous in the play, is cut. We hear no "Et tu, Brute?" (III.i.77)—but that may be part of the exigencies of the mystery plot.

In short, Shakespeare was alive and kicking (in B movies, at least) in 1945. He may have been kicking to get out of them, but he was kicking all the same.
Links: The Film at IMDB.