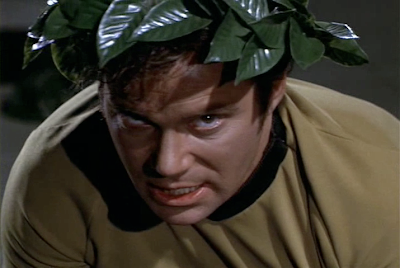 That's what's happening to Captain Kirk, anyway. The bad guy wants to be entertained, and he's able to force Kirk to recite Shakespeare sonnets—or, to be precise, at least Sonnet 57. Take a look at that section first (other sections will be inserted below).

Here's the sonnet in question:

Being your slave, what should I do but tend
Upon the hours and times of your desire?
I have no precious time at all to spend,
Nor services to do, till you require.
Nor dare I chide the world-without-end hour
Whilst I, my sovereign, watch the clock for you,
Nor think the bitterness of absence sour
When you have bid your servant once adieu;
Nor dare I question with my jealous thought
Where you may be, or your affairs suppose,
But, like a sad slave, stay and think of nought
Save, where you are how happy you make those.
So true a fool is love that in your will,
Though you do any thing, he thinks no ill.

Before you complain that Kirk's delivery isn't absolutely top-notch, look at the act he's following:


Yep, that's Mr. Spock, smiling! He hasn't smiled since the pilot episode! And what's that he's saying / reciting (together with Captain Kirk)?

I'm Tweedledee; he's Tweedledum:
Two spacemen marching to a drum.
We slith among the mimsey toves
And gyre among the borogoves.

My goodness. That's even worse than the "Very bad poetry" that Mr. Spock critiqued when they met the witches! Even a crawling, forced delivery of Sonnet 57 will be better than that!

But, I suppose, there is some interest in Kirk's choice of sonnet (or is it the bad guy's choice?): "Being your slave" catches up the idea of how foolish it is to think that, whatever the beloved may do, it cannot be ill. Perhaps there's something, too, in the fact that Kirk doesn't complete the quatrain, breaking off before the final word. But maybe that's just Dr. McCoy's interruption.

For those of you who would like to see the complete sequence, here are the two parts put back together: