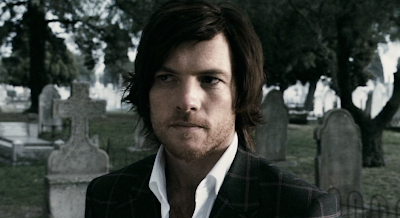 Macbeth. Dir. Geoffrey Wright. Perf. Sam Worthington and Victoria Hill. 2006. DVD. Starz / Anchor Bay, 2007.
The main problem with Geoffrey's Wright's version of Macbeth isn't that it's uninteresting—there are many points of interest in it. And it's not that Sam Worthington's Macbeth lacks charisma. But the film still isn't successful.

Perhaps it's the altered setting. It's set in an Australian drug world—and its grittiness is fine for both the horrors of the battlefield and the evil of Macbeth himeself, but something is lost in the transition. Do we care that the "good" drug lord is bumped off and replaced by the "bad" drug lord?

Perhaps it's the witches, who are teenage seductresses who show up naked in Macbeth's kitchen. Perhaps it's just the deep despair of a film where no one seems to believe in what they're fighting for.

But the dagger speech has a fascinating take on it! Instead of a CGI dagger (à la Polanski) or no dagger at all (après la façon de many others), this Macbeth sees a perfectly ordinary image and ascribes dagger-like characteristics to it.

Of course, people talking about knives in Australian accents brings another cultural artifact immediately to mind—it's toward the end of the clip below:


The information about the other cultural artifact appears at the end of this post.

And, in case you were wondering how Birnam Wood can come to Dunsinane in a modern Australia, here's the answer: 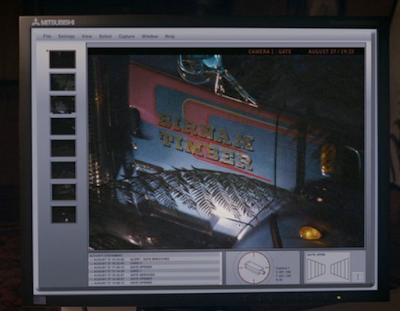 I found this blog last week and I just LOVE it. I love it so much that I posted about it over at http://www.geekachicas.com . I hope that's ok. I'll be reading from now on. :)

Thank you very much! Your compliment is very kind, and I appreciate it enormously!

I see from your post that you appreciate the Star Trek and Shakespeare connections. After we're done with Macbeth, we're heading back to Star Trek! I missed a few references, and I want to catch up on them.

Yay for more Star Trek and Shakespeare! It's my science fiction connections that got me across the ocean last summer to see the RSC Hamlet. How could I miss Captain Picard and Doctor Who in Hamlet?

yeah,,,for me it is about the altered setting, too. You know, I was expecting for more "interesting" setting than bad and good drug lord, and so were some of my friends. The plot and the way the story goes is good enough, but I don't know, I'm kinda bored to watch it. Up to this day, the best Shakespeare movie for me is A Midsummer Night Dream.