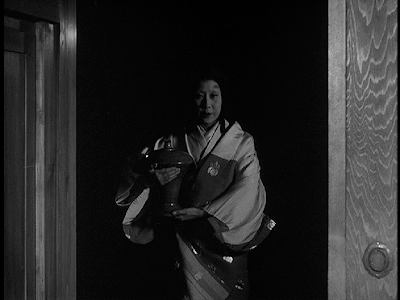 Throne of Blood [Kumonosu jô (The Castle of the Spider’s Web)]. Dir. Akira Kurosawa. Perf. Isuzu Yamada and Toshirô Mifune. 1957. DVD. Criterion, 2003.
If you think that Diana Rigg's Regan is bone-chilling, try Asaji, the Lady Macbeth analogue in Kurosawa's Throne of Blood. Her slow departure into the darkness and her return with the drugged wine to give the soldiers is thrilling ("thrilling" in its older, more spine-tingling sense).

The dagger speech itself is also astonishing. Actually, "speech" is something of a misnomer. The sense of the speech is completely internalized! Washizu (the Macbeth analogue) has to express it all without saying a word. Watch:

And the entire film is as brilliant—as stunning—as flabbergasting as that scene. If, somehow, you've missed it, watch the rest at once. At once!
Links: The Film at IMDB.

Hello, Professor!
I came across your blog today while scouring the Internet for a variety of Macbeth "dagger" speeches to show my students, who have chosen that soliloquy to learn.

I first saw Throne of Blood in a Rhetoric of Film class at the University of Massachusetts in 1972. Since then I have occasionally watched scenes or. sections of it in preparation for teaching it to my high school Brit Lit classes. When I began teaching the play for a Humanities seminar this spring, I bought the film on Amazon and watched it in its entirety again. I was amazed at how much of the film -- including details of gesture and set -- has stuck with me. A lot of that has to do with the pace of scenes such as this one. I agree that Isuzu Yamada is amazing as Asaji.

Thank you for your introduction to this scene. I will certainly show it in class.

Yes, every frame is a marvel. Cinematographically, the scene where the fog lifts from the castle as the Banquet and the Macbeth analogues discuss what the apparition in the forest told them and the scene that corresponds to Birnam Wood coming to Dunsinane could not have been better done.

I hope your students appreciate that scene in particular!