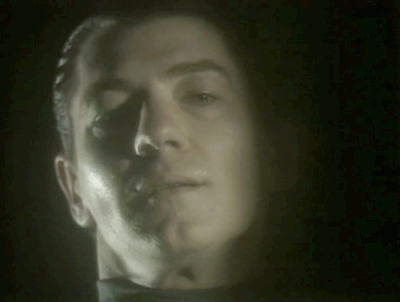 Macbeth. Dir. Philip Casson. Perf. Ian McKellen and Judi Dench. 1979. DVD. A&E Home Video, 2004.
One of the places to watch in any production of Macbeth is the dagger speech. In addition to its obvious dramatic pedigree, it's one of the places where the director and the actor have to make some extremely important decisions—decisions that may determine the significance of much else in the play.

Iam McKellen, directed by Philip Casson, gives a fairly straightforward version of the speech. In part because it is a filmed version of a stage play, there aren't any special effects surrounding the dagger—not even a lighting change. This tends to place not only the imagined dagger but also the imagined outcome of Duncan's murder more firmly in Macbeth himself. In other words, McKellen's delivery of the lines and Casson's decisions as the director tend to put more of the weight of action on Macbeth and less on the supernatural power of the witches:


In addition to that (as if that wasn't reason enough to run out and buy the DVD—or just to click on the link below, supporting Bardfilm as you do so), Judi Dench is extraordinary as Lady Macbeth. She makes some stunningly interesting decisions that give her character astounding depths that are unexpected in Lady Macbeths (Ladies Macbeth?) in general.
Links: The Film at IMDB.