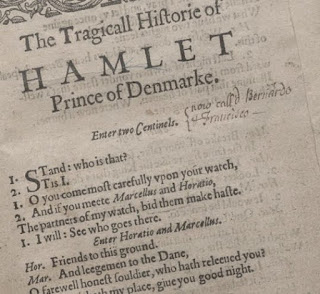 These songs often had their origins on Twitter. An exchange or two would lead to a parody of a line or two from a song.

Later, those might turn into full versions of songs. But they're usually for private consumption, unlike the songs I write for the students in my Shakespeare classes.

Several years ago, I started toying around with Queen's "Bohemian Rhapsody," and I even got so far as to put together a recording. But I lacked the time and the talent to make it truly professional.

Don't get your hopes up—I still don't have time or talent, but I don't imagine I ever will have. I thought the best thing to do would be to put a quick lyric video together and throw it out there, warts and all.

Here, then, is "Shakespearean Rhapsody." Enjoy!

You can also try "Danish Paradise," "Dunsinane Prison Blues," or "Let's Do It (Let's Fall in Love . . . with Shakespeare)." Or steer toward this musical version of King Lear's madness. Alternately, investigate the big number from the musical Pyramus. Or you could listen to this musical PSA that warns people to stay clear of the Great River Shakespeare Festival.
Copyright 2008-2039 by kj at 10:28 AM