Remember the Episode of Cheers Where They Did Othello? 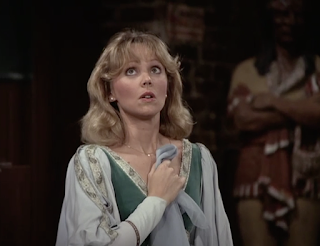 "Homicidal Ham." By David Lloyd. Perf. Ted Danson, Shelley Long, Nicholas Colasanto, Rhea Perlman, John Ratzenberger, George Wendt, Derek McGrath, and Severn Darden. Dir. James Burrows. Cheers. Season 2, episode 4. NBC. 27 October 1983. DVD. Paramount, n.d.
Well, neither did I, and I was a trifle surprised when I learned of it. I knew that Frasier had done a Hamlet episode (for which, q.v.), and the character of Frasier Crane owes its very being to Cheers, but I never found Cheers to be that interesting. The main plot motif (will Sam bed or marry whatever women lead is in that season, and how many other women will he sleep with in the meantime?) seemed pretty dull and not open to tremendous depth of character development. It also got pretty repetitious and pretty old. But I digress.

Early in Season two, an episode works in a performance of Desdemona's death scene from Othello. Diane has taken an ex-con (whose crime was murdering a barmaid) under her wing, and he develops a crush on her. But he sees her kiss Sam at one of the couple's on-again phases of their on-again / off-again (on-again / off-again, repeat ad nauseum) relationship, and that makes him murderously jealous. In character as Othello, he attempts to strangle Diane. Thus, the episode fits Kenneth Rothwell's "Mirror Movie" category (for which, q.v.).

I feel a need to warn you that the clip that follows is pretty disturbing and not, for the most part, funny. But it's also interesting. The show uses the jealousy in Othello without addressing the race issues in Othello. The man playing Othello is white (as is our Desdemona), but he's also marginalized (because he's an ex-con).

It's certainly not the typical way to work Shakespeare in to a sit-com, but it may help us think about the abstraction of jealousy without the issue of race being connected to it.

Note: Of additional interest are the audience reactions. Norm and Cliff are offended when they think they're being condescended to—as if Shakespeare were too high for them to reach. And Coach (who is often portrayed as . . . well, not all there), when Diane says, "Help! This psycho's trying to kill me," says, "It's the only line of Shakespeare I ever understood!"
Links: The Episode at IMDB.