Remember the Episode of Sanford and Son Where They Did Othello? 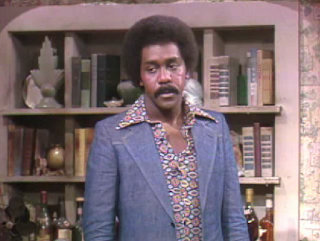 "Lamont as Othello." By Ilunga Adell. Perf. Red Foxx, Demond Wilson, Don Bexley, Maureen Arthur, Jack Manning, and Ann Driscoll. Dir. Peter Baldwin. Sanford and Son. Season 3, episode 1. NBC. 14 September 1973. DVD. Sony Pictures Home Entertainment, 2008.
I didn't see this when it was broadcast, and I'm not sure I remember this specific episode when it was in reruns, but I've been aware of the episode for a long time.

The plot of the episode involves Lamont's attempt to rehearse the role of Othello with Marilyn, the woman in charge of his drama workshop. I wish I could give you the entire episode because there really is a lot of thoughtful material in what seems like a silly seventies sit-com on the surface. The episode thinks about black and white reactions to the idea of a black man murdering a white woman.

I've put together a clip with all I can give you, and it breaks into four basic segments: The Shakespearean Setup, Fred's reaction to his son's rehearsal of Desdemona's death scene, some riffing on Shakespeare, and Marilyn's parents' reaction when they see the same scene.

After Fred Sanford breaks up the rehearsal at the Sandfords' home, he asks why they can't rehearse at Marilyn's house. When he learns that she lives with her parents in Beverly Hills, he declares that to be the reason they can't rehearse there. But, to prove a point about black people being welcome in their home, Marilyn insists that they move the rehearsal.

Marilyn thinks that her parents are out of town, but they've actually gone to bed. Fred Sanford, bored by the rehearsal and searching for the TV, accidentally walks into their bedroom. When he tells them he's just looking for the TV, they fearfully tell him that he can take it.

After everything is explained, Fred accuses of the parents of being bigots because they assumed that he was there to rob them. The mother says that they're not bigots, offering this proof: "We both belong to the Urban League." The father keeps referring to Fred as "a strange man," at which he takes great offense; Fred refers to the family as "you people," which the father takes as an indication of intolerance on Fred's part.

The show thus asks for a deeper consideration of actual, potential, or latent racism, using Othello as a starting point for doing so.

Here's a clip that has most of the Shakespearean elements of the episode:

There is a clip that I'd found once upon a time that has Lamont suggest that he's interested in all three areas of the arts - acting, directing, and tap dancing.

It's amazing how on the one hand the show could try to teach us some things about racism while at the same time going for the racist humor whenever it suited them.

Yes, but that could be a joke about racism rather than a racist joke, couldn't it? Lamont could be pointing out a stereotype rather than (as a character) being forced into one.

Were there any Shakespeare episodes of All in the Family?