Shakespeare in Huckleberry Finn (The Novel and the 1955 Film) 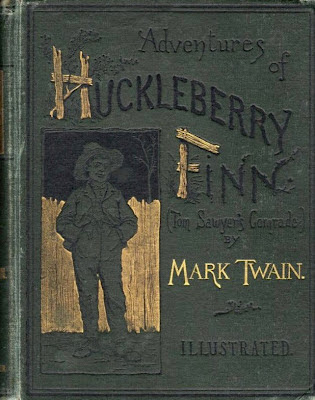 Twain, Mark. Huckleberry Finn. New York: Charles L. Webster and Company, 1885.
Huckleberry Finn. Dir. Herbert B. Swope, Jr. Perf. Denise Alexander, John Carradine, and Walter Catlett. 1955. DVD. Synergy Entertainment, 2007.
Do you remember the great Shakespearean actors from Mark Twain's Huckleberry Finn? They come along in Chapter Nineteen, eventually revealing their "true" identities to be aristocratic: one is a Duke, and the other is the long-lost Louis XVII of France.

I've been hoping mightily that one or another of the film versions of the novel would contain some part of their Shakespeare performances. But I've tried three so far, and this is the only one that gives us a bit of a Shakespearean connection—and that isn't much.

But Twain does some remarkable things with those characters and their knowledge of Shakespeare. Here's the scene where the Duke and the King plan a night of Shakespeare for the next town they visit—concluding with a marvelous interpretation of Hamlet's soliloquy:


"I'll answer by doing the Highland fling or the sailor's hornpipe; and you—well, let me see—oh, I've got it—you can do Hamlet's soliloquy."

"Hamlet's soliloquy, you know; the most celebrated thing in Shakespeare. Ah, it's sublime, sublime! Always fetches the house. I haven't got it in the book—I've only got one volume—but I reckon I can piece it out from memory. I'll just walk up and down a minute, and see if I can call it back from recollection's vaults."

So he went to marching up and down, thinking, and frowning horrible every now and then; then he would hoist up his eyebrows; next he would squeeze his hand on his forehead and stagger back and kind of moan; next he would sigh, and next he'd let on to drop a tear. It was beautiful to see him. By and by he got it. He told us to give attention. Then he strikes a most noble attitude, with one leg shoved forwards, and his arms stretched away up, and his head tilted back, looking up at the sky; and then he begins to rip and rave and grit his teeth; and after that, all through his speech, he howled, and spread around, and swelled up his chest, and just knocked the spots out of any acting ever I see before. This is the speech—I learned it, easy enough, while he was learning it to the king:


To be, or not to be; that is the bare bodkin
That makes calamity of so long life;
For who would fardels bear, till Birnam Wood do come to Dunsinane,
But that the fear of something after death
Murders the innocent sleep,
Great nature's second course,
And makes us rather sling the arrows of outrageous fortune
Than fly to others that we know not of.
There's the respect must give us pause:
Wake Duncan with thy knocking! I would thou couldst;
For who would bear the whips and scorns of time,
The oppressor's wrong, the proud man's contumely,
The law's delay, and the quietus which his pangs might take,
In the dead waste and middle of the night, when churchyards yawn
In customary suits of solemn black,
But that the undiscovered country from whose bourne no traveler returns,
Breathes forth contagion on the world,
And thus the native hue of resolution, like the poor cat i' the adage,
Is sicklied o'er with care,
And all the clouds that lowered o'er our housetops,
With this regard their currents turn awry,
And lose the name of action.
'Tis a consummation devoutly to be wished.
But soft you, the fair Ophelia:
Ope not thy ponderous and marble jaws,
But get thee to a nunnery—go! (181-82)

The film listed above doesn't give us that (I'm still searching for one that does), but it does give us a fragment of Shakespeare embedded in the two connivers' conversation: