The Quality of Mercy in The Office 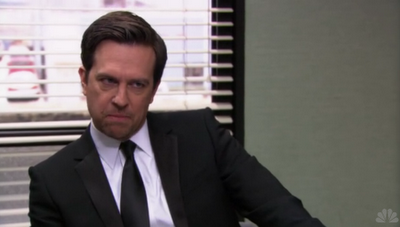 "Free Family Portrait Studio." By Greg Daniels and B. J. Novak. Perf. Rainn Wilson, John Krasinski, Jenna Fischer, and Catherine Tate. Dir. B. J. Novak. The Office. Season 8, episode 24. NBC. 10 May 2012. Hulu.com.
Two people mentioned that the latest episode of The Office contains a Shakespeare reference. That seemed like enough to require tracking it down.

I haven't watched the entire episode, but the context I've picked up is that the boss dearly desires to fire the character played by Catherine Tate—but she pulls what he calls "The Bard Card," using Shakespeare to elicit sympathy for her and to create a sense of superiority in him.

Note: I returned to this reference much later in the blog's history.