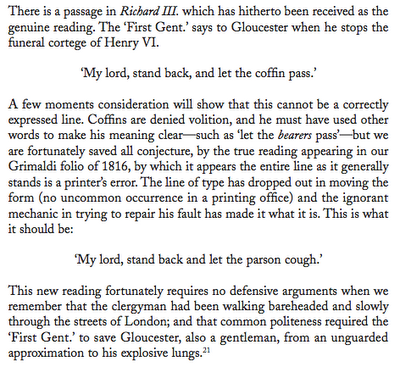 Fortunately, Richard Schoch, in the most recent Shakespeare Bulletin, has written a tremendous analysis of the piece, bringing it rightfully into the limelight.

Collier had, in 1852, purported to find a Second Folio with extensive notations by "Thos. Perkins"—a man writing in the 1650s who had some connection to the English theatre before its closure in 1642. The book, which came to be known as The Perkins Folio, was faked by Collier himself.

In 1853, before Collier's forgery was firmly debunked, someone put together a parody. It claims to be a partial folio "annotated in 1816 by the great Regency theatrical clown Joey Grimaldi" (Schoch 5). The parody itself is brilliant. Here's a passage that clarifies a supposed textual conundrum in Richard III:

There is a passage in Richard III. which has hitherto been received as the genuine reading. The 'First Gent.' says to Gloucester when he stops the funeral cortege of Henry VI.

'My lord, stand back, and let the coffin pass.'

A few moments consideration will show that this cannot be a correctly expressed line. Coffins are denied volition, and he must have used other words to make his meaning clear—such as 'let the bearers pass'—but we are fortunately saved all conjecture, by the true reading appearing in our Grimaldi folio of 1816, by which it appears the entire line as it generally stands is a printer's error. The line of type has dropped out in moving the form (no uncommon occurrence in a printing office) and the ignorant mechanic in trying to repair his fault has made it what it is. This is what it should be:

'My lord, stand back and let the parson cough.'

This new reading fortunately requires no defensive arguments when we remember that the clergyman had been walking bareheaded and slowly through the streets of London; and that common politeness required the 'First Gent.' to save Gloucester, also a gentleman, from an unguarded approximation to his explosive lungs.

The parody is delightful, and Schoch's examination of it is equally so.Links: The official website for Shakespeare Bulletin.
Copyright 2008-2039 by kj at 7:00 AM