Yet Another Attempt at an Oxfordian Young Adult Novel 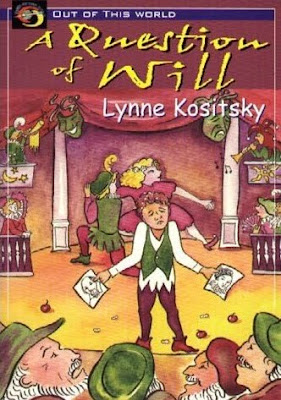 Kositsky, Lynne. A Question of Will. Montréal: Roussan, 2000.
I've run across another young adult novel that heavily and propagandistically perpetuates the myth that Edward de Vere, the Seventeenth Earl of Oxford, wrote the plays attributed to William Shakespeare.

We're taken back to The Theatre (not, as is more usual, the Globe), which gives us a setting that must, of necessity, be before 1599, when The Threatre was dismantled and the Globe constructed. Yet Hamlet—probably not written before 1601 at the earliest—is the first production we encounter.

And that's not the only historical inaccuracy. When the de Vere material starts, we go much further away from historical reality.

The book suggests that Shakespeare was a bad actor (though the question of how he could have kept acting through a twenty-year career if he was truly awful isn't addressed), and its protagonist—called "Willow"—describes him as a "creepy old geezer" (111) and a "shambling stooge" (118).

Near the end, we hear from the Earl of Oxford (who has been hanging around The Theatre, trying to deliver plays to Shakespeare on the Q.T. but not being terribly successful at keeping the secrets secret), and he gives this account of himself:


I never tried to hide the truth from you, Willow. I understood from the outset you had wit enough to work out the whys and wherefores. My nickname, Shake-Speare, given me at court, was similar to your master's surname. He started to pinch the plaudits meant for me, and I was delighted, borrowed him for a front man in fact, paid him handsomely to quiet the Queen's ire. She doesn't like it known her courtiers scratch out their livings with the quill. (117)

The book presents farfetched claims in a less-than-entertaining, heavy-handed manner. For better-presented farfetched claims, try Elise Broach's Shakespeare's Secret. Or, better yet, read the best of the young adult novels set in Shakespeare's day: Susan Cooper's King of Shadows. Cooper's novel has the added benefit of being historical fiction that is historically accurate.