Sidetracked by "Shakespeare on the Rail" 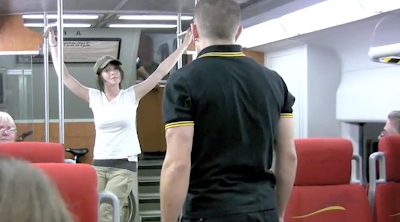 As You Like It. Act IV, scene i, lines 69-116. Perf. Christina Slyter and Andrew Leith. Shakespeare on the Rail. New Mexico Rail Runner. June-August 2010.I need to interrupt this series of posts on Macbeth to mention something intriguing that I just heard about. It fits the theme of "Shakespeare Performed in Transit" that began when Shakespeare was first performed on board The Dragon in 1607 (for which, q.v.).

In 2010, a company associated with the University of New Mexico put Shakespeare on the train that runs between Albuquerque and Santa Fe. I don't know much more than that, but it's an intriguing idea. I also don't know whether the plays were performed to a captive audience or to an audience that knew what it was getting when it booked its ticket.

Here's a brief clip of one performance. Note the woman who is sitting with her back to the main playing space. She's trying to read a magazine during the early lines—yet she clutches it to herself as the last few lines are delivered, completely captivated by Shakespeare.

Yes! It is happening again this year. Go to nmrailrunner.com for more information. And in regards to the other question, some of the passengers do know that it is happening and will ride that train for that reason and then some other passengers do not know it will be happening. Thanks! -Lauren Albonico, director of Shakespeare on the Rail

Thanks for the news! I've updated the post above with links to this summer's schedule.