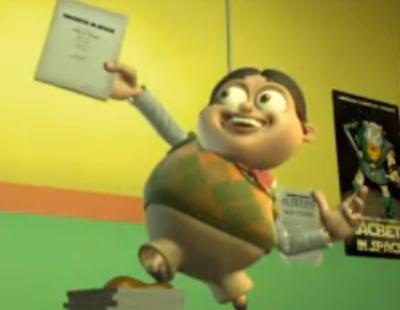 But I do know that I appreciate the way the Shakespeare is presented in this episode. The show assumes that kids will know enough about Shakespeare to get the jokes—that Macbeth isn't "some guy with a girl's last name" and that William Shakespeare isn't the custodian.

And I admire the character of Bolbi Stroganofsky (variously spelled "Stroganovsky"), who seems to be the show's "stereotypical foreign exchange student" character. He speaks with an odd accent, but he has genuine passion for Shakespeare, as revealed in the quotes he utters near the beginning and near the end of this clip.

The school is holding auditions for a play called Macbeth in Space and, well, the rest of the clip (which, I'm afraid, jerks a bit—like an old projector—due to some oddities about video transfer) speaks for itself.


You can watch more of the episode on the Nickelodeon website, or you can buy the entire episode at amazon.com (see link below)—but the episode doesn't seem to have been released on DVD at all. Enjoy!
Links: The Episode at IMDB.

Click below to purchase the episode from amazon.com
(and to support Bardfilm as you do so).