The Complete Works of William Shakespeare (Abridged) at UNWSP 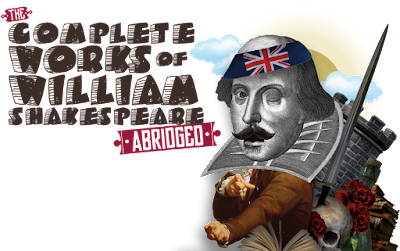 The Complete Works of William Shakespeare (Abridged). Dir. Daniel McLaughlin. Perf. Dawson Ehlke, Michael Johnson, and Tommy McCarthy. By Adam Long, Daniel Singer, and Jess Winfield. University of Northwestern—St. Paul Department of Theatre. St. Paul, Minnesota, 12-21 January 2017.
In just a week, the Department of Theatre will open its production of The Complete Works of William Shakespeare (Abridged). If you're anywhere in the area, I urge you to come see it.

I've seen the Reduced Shakespeare Company's DVD of the farcical romp through the works of Shakespeare, and it's quite good—but there's something about a local and live production of the show that is immensely appealing.

Here's the trailer they put together. It features a Shakespeare scholar who doesn't quite grasp the intention of the play:


I'm also informed that some version of the following biographical notes will make their way into the program. Clearly, this show is unmissable.

William Shakespeare (1564-1616, closed Sundays) is not only one of the greatest dramatists of all time, he was also one of the most productive. He wrote between thirty-seven and thirty-nine plays, including these masterpieces: Hamlet, Midsummer Night’s Dream, Moby Dick, Macbeth, Huckleberry Finn, Richard III, Richard IV (The Revenge), and The Girl with the Dragon Tattoo. He also wrote two lengthy dramatic poems, 154 sonnets, two cookbooks, and a guide to haunted apartments in Sheboygan.

In his work, Shakespeare asks the enduring questions about what it means to be human: How does it feel to be betrayed? To fall in love? To lose your keys? To be hungry? To wake up convinced that you just missed the big exam? He speaks eloquently, having his characters explain in their own words what it’s like to have the universal experiences we all encounter every day: being jealous, feeling old, and being tempted by witches to kill the king of Scotland and seize the Scottish crown.

As you watch the performance, pay particular attention to the most memorable figures in all of Shakespeare. You’ll find Othello, Prince of Denmark rubbing shoulders with the Two Merry Gentlemen of Windsor. Romeo and Juliet will go on a double date with Antony and Cleopatra. Characters from Much Ado About a Midsummer Night’s Dream will vie for your attention with those from The Taming of King Lear. The two parts of Henry IV will be compiled into the one part of Henry VIII. And when Ophelia starts heading toward the water, we’ll all yell, “Julius! Seize her!”

Shakespeare is an author for the ages, and his works can be the study of a lifetime. We can’t give you a lifetime, but we can provide The Complete Works of William Shakespeare (Abridged). And now, as Hamlet says, “Look where my abridgement comes!” (Hamlet, II.ii.127).


Come see the show if you can! I think we'll all have a very good time.
Note: Here's a blog-native version of the video above—just in case the link above goes sour.

Props to UNW theatre company for putting on this production and to Bardfilm for the ironic review. Would love to attend the performance, but Minnesota.

No doubt, he is the God of literature. Hands down to all the works of william shakespeare