Romeo and Juliet in The Brady Bunch 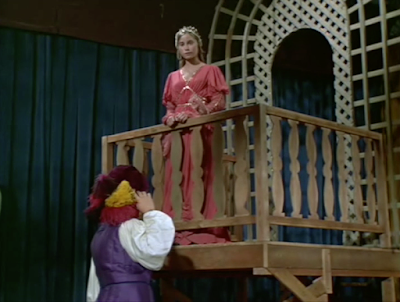 "Juliet is the Sun." By Brad Radnitz. Perf. Robert Reed, Florence Henderson, and Ann B. Davis. Dir. Jack Arnold. The Brady Bunch. Season 3, episode 7. ABC. 29 October 1971. DVD. Paramount, 2015.
I don't recall seeing this episode in my admittedly too-copious youthful rerun viewing, but Shakespeare Geek mentioned it at some point, and I tracked it down.

In this episode, everyone in the Brady household is in a state of high excitement and emotional excess.

All right, that doesn't really narrow it down all that much.

In this episode, everyone in the Brady household is in a state of high excitement and emotional excess because the school is putting on Romeo and Juliet and Marsha is hoping for a part.

The clips below will walk you through the plot, and they'll pay particular attention to the various and sundry Shakespeare-related moments throughout.

The Opening Gambit:  Will Marsha be Excited about the Role of Juliet?

Alice, you played once i' the university, you say?


Shakespeare Don't Get No Respect!


Every year, I set aside one day in my Shakespeare and Film class for what the syllabus terms "Mystery Shakespearean Derivatives." I think this episode might make the cut this year.
Links: The Film at IMDB.