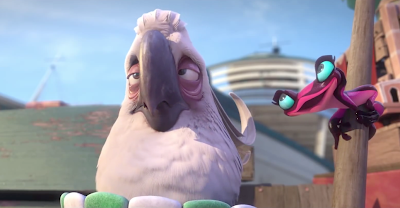 Rio 2. Dir. Carlos Saldanha. Perf. Anne Hathaway, Leslie Mann, Rodrigo Santoro, Jemaine Clement, and Kristin Chenoweth. 2014. Twentieth Century Fox / Blue Sky Studios.
In between discussions of The Tempest and its many interesting problems (for which, q.v.), Shakespeare Geek offhandedly mentioned that the trailer for Rio 2 alludes to and gives credit to Shakespeare.

I couldn't resist tracking it down and passing it along. In the brief clip below, a cockatoo with feathers (?) that resemble a ruff adapts a quotation from Hamlet. The line is part of Hamlet's encouragement to the players in the play-within-the-play to get back to business: "The croaking raven doth bellow for revenge" (III.ii.254). Enjoy!

Links: The Film at IMDB.  The full trailer.