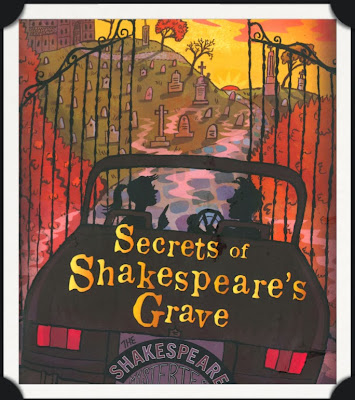 Hicks, Deron R. Secrets of Shakespeare's Grave. New York: Houghton Mifflin Harcourt Books for Young Readers, 2012.
When I first spotted this book in the bookstore, I thought it might be another young adult book debunking Shakespeare's authorship of the works attributed to Shakespeare.

So far (I've only read the first of the books in a series of at least two books), it's been exactly the opposite, though I don't want to tell you too much for fear of spoiling it for you.

The plot involves a brother and a sister who need to do what they can to save the family publishing business from being taken over by a disreputable relative.

More than that I'm not at liberty to reveal. But I will tell you that I enjoyed the book very much. It is filled with adventure—and not of the corny, tacky variety. It also involves intriguing trips to New York, London, and Stratford-upon-Avon to track down clues to the family treasure.  Read it and enjoy!

Note: The book's plot involves what I take to be a misreading of the poem on Shakespeare's Monument in Stratford. The line in question reads ". . . Si[t]h all that he hath writt / Leaves living art, but page, to serve his witt." The book considers the word "page" here to mean a piece of paper. Given the context, however, I take "page" to mean a servant. It's a minor point, but I thought I should mention it.

Additional Note: For the second book in the series, click here.