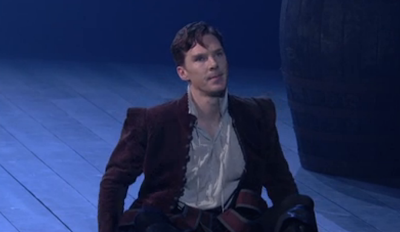 The section that is likely to catch everyone's eye is Benedict Cumberbatch.  He who plays Sherlock in the new BBC Sherlock series and Khan in Star Trek: Into Darkness plays Rosencrantz in the "dead in a box" sequence from the middle of Act II of Rosencrantz and Guildenstern are Dead, Tom Stoppard's first play on the stage of the National Theatre. Here's the scene in question:

That is, of course, great—and Kobna Holdbrook-Smith does a magnificent job as Guildenstern. But the entire show has some fascinating clips from the archives that I can't wait to enjoy.