Book Note: The Tragedy of Arthur 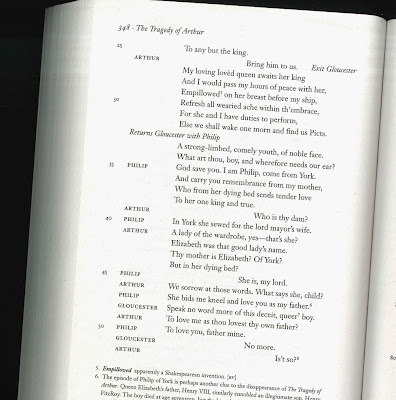 The protagonist of the novel, Arthur Philips, a relatively-successful novel writer himself, finds himself in possession of a unique book: the 1597 quarto of The Tragedy of Arthur by William Shakespeare. The novel takes the form of Arthur fulfilling his contractual obligations by writing the introduction to the first modern edition of this newly-discovered Shakespeare play.

The problem is that Arthur has become convinced that the play is a forgery. His father, who passed the book along to him, has served many jail terms for forgery, and Arthur thinks this is just one more forgery.

The novel successfully blurs all sorts of lines: between novel and memoir; between fiction and scholarship (in many ways, it reminded me of Nabokov's Pale Fire); between Shakespeare and his imitators. In his hints and suggestions that the play is a forgery, the narrator almost seems to protest too much. The more he hints that it's fake, the more the reader is inclined to consider its authenticity.

And the story he tells of growing up with a father who is part artist, part forger, and part confidence trickster is both very moving and very entertaining. Elements of the relationships within the family are reflected in the play. Is that coincidence, which would imply that the play is authentic? Or are they autobiographical reflections, which would make the play a fake? The questions continue the blurring of fiction and memoir.

A similar echo is in the exchange in the image above—not in the dialogue itself but in the speech headings. In the repeated "Arthur . . . Philip . . . Arthur . . . Philip" along the left-hand margin, the narrator finds another connection—one between the text and his own name—that's too hard to explain away.

The novel itself purports to be the introduction to a scholarly edition of the play. At the novel's end, the play begins. Arthur Philips (the novelist of the novel rather than the novelist within the novel) has written a five-act play in the style of Shakespeare. In terms of its plot and language, I found it to be a bit tedious—yet the introduction has set it up so cleverly that I couldn't help but think about how I would make the case for its being Shakespeare's or prove it not to be. The novel itself, as it turns out, leaves the question of its authenticity up in the air. The narrator is convinced it isn't—but many Shakespeare scholars and experts in printed texts of the 1500s come out in favor of it.

All in all, it was a fabulous and fascinating read. I enjoyed it immensely, and I highly recommend it.

Note:  For another review--one with a few more details, try the one Shakespeare Geek provides.

"The Tragedy of Arthur" is a most elegant comedy of errors conceived by Arthur Phillips. It's one of the funniest novels I have read in years, and definitely this year's best. Phillips has added yet another remarkable novel to his oeuvre, and one which confirms his place as among the finest American writers of my generation.
AC Repair Plano