A Rare Allusion to Cymbeline in Star Trek 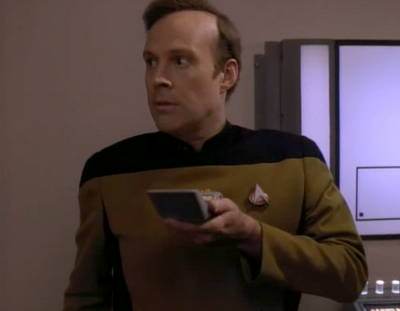 In this episode, the hypochondriac Barclay is worried that he may be suffering from a particularly Shakespearean illness: Cymbeline Blood Burn:


The skeptics among you may point out that the condition is spelled "Symbalene" in the captioning to the episode, and those same skeptics may point to the entry on Symbalene blood burn at Memory Alpha; however, those individuals may have overlooked two important points in their skepticism. First, the disease is likely named for this quote from Shakespeare's Cymbeline:


Thou basest thing, avoid! Hence, from my sight!
If after this command thou fraught the court
With thy unworthiness, thou diest: away!
Thou'rt poison to my blood. (I.i.125-28)

It's clear enough that a poison in the blood was enough to inspire the name of this condition, but the second point clinches it. Barclay had originally thought he was suffering from "Terellian Death Syndrome," which could be spelled "Tyrellian Death Syndrome" to indicate its connection to the character Tyrrel from Richard III. Tyrrel, as you know, is the one who dispatches the two princes in the Tower of London. If any Shakespeare character could be equated with a Death Syndrome, it's Tyrrel.
Links: The Episode at IMDB.