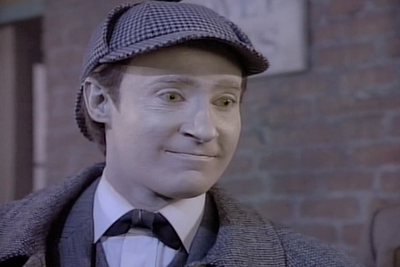 “Elementary, Dear Data.” By Brian Alan Lane. Perf. Patrick Stewart, Jonathan Frakes, LeVar Burton, Michael Dorn, Diana Muldaur, and Brent Spiner. Dir. Rob Bowman. Star Trek: The Next Generation. Season 2, episode 3. Syndicated television. 3 December 1988. DVD. Paramount, 2002.
Completing my collection of Shakespeare references in Star Trek (for which, q.v.) has proven more difficult than I thought it would be. This week, I'll be adding a few small moments that I overlooked—even though I wonder if some of them count.

For example, is it Shakespeare when the person being quoted is clearly Sherlock Holmes—even if Sherlock Holmes is quoting from Shakespeare? In this clip, Data has taken on the role of Holmes, and he concludes his deductions with "The Game's afoot" (Henry V, III.i.32).


Data does extend Shakespeare's original contraction to "The game is afoot," but he doesn't extend "afoot" to "a foot," which would create an interesting image.
Links: The Episode at IMDB.