"The Show Must Go Off": Shakespeare and Frasier 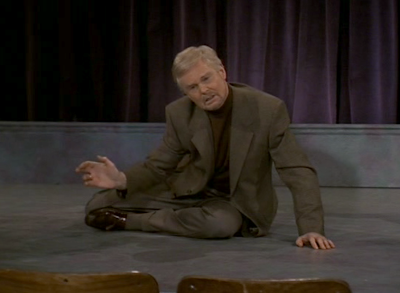 In an episode that goes by the title "The Show Must Go Off," Frasier discovers, at a science fiction convention, the man who instilled a love of Shakespeare in him. Jackson Hedley (played by the famed Shakespearean actor Derek Jacobi) hasn't been able to do Shakespeare since he took on the role of an android on a popular television series. The Crane brothers are determined to reward him for giving them a love of Shakespeare, and they arrange for him to do a one-man show of Greatest Hits from Shakespeare. During the process, however, they come to realize that he's a terrible actor:

Click below to purchase the eighth season from amazon.com
(and to support Bardfilm as you do so).