Titularly Parasitical Title in an episode of Frasier

"Roz's Krantz and Gouldenstein are Dead." By David Angell and Peter Casey. Perf. Kelsey Grammer, Jane Leeves , David Hyde Pierc, Peri Gilpin, John Mahoney, and James Earl Jones. Dir. Jeffrey Melman. Frasier. Season 4, episode 15. NBC. 11 March 1997. DVD. Paramount, 2007.
I would expect a show like Frasier, with all its references to haute-couture (an example would be that the show would use a phrase like haute-couture without it seeming out of place—though it would still seem somewhat pretentious) to have a lot of Shakespeare. After all, there's lots of opera, psychology, and other highly-intellectual material.

I don't know the show well enough to know whether there's much Shakespeare there, but I did find a title that refers to a play that is a derivative version of Shakespeare's Hamlet. The title refers to Roz's volunteer work at a nursing home and the death of two people she befriended: Mrs. Krantz and Mr. Gouldenstein (or Mr. Krantz and Mrs. Gouldenstein—I can't quite remember).

Unfortunately, there wasn't any Shakespeare beyond the title—but James Earl Jones makes an appearance in the episode and does a magnificent job.

Perhaps I should spend my time trying to track down clips of Kelsey Grammar as Macbeth.

You may be laughing, but he did play Macbeth. On Boadway. For ten days: 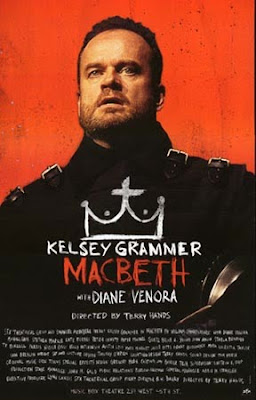 The reviews, I'm afraid, were not good.
Links: The Episode at IMDB.

Click below to purchase the season—well, all the seasons, really—from amazon.com
(and to support Bardfilm as you do so).

I do remember Niles and Frasier producing a Shakespeare play, and something having to do with their star actor showing up drunk. Could have been the Scottish play, I can't remember.

I also remember a quote from the show, likely that episode, where Niles told Frasier, "We're a hit, a palpable hit!"

In Season 2 Episode 14, Frasiers suitcase gets stolen, and while he gets more and more agravated, at one point on the verge of loosing his hope in mankind, he passionatly starts shouting out the quote: "He who steals my purse, steals my trash, but he who steals my good name, steals.. steals.. Ah forget, it but i'm good an angry!" Or something alike.. Very entertaining episode on a sidenote..

Thanks for the comments, Duane and Marc. There's much more Shakespeare in an episode called "The Show Must Go Off" (post to come soon), though that one does not contain the line "We're a hit, a palpable hit!"—which I'll now never be able to hear in any other voice than Niles Crane.

Once again, Bardfilm has only been able to scratch the surface!