The Fishmonger Scene in the Tennant / Stewart Hamlet 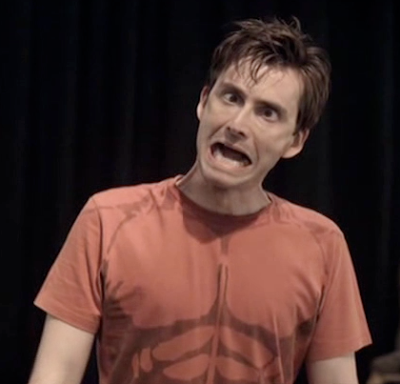 Although I hope to post a longer, more-detailed essay on the David Tennant / Patrick Stewart Hamlet at some point, I don't anticipate being able to do so any time soon. I used it with my last Shakespeare and Film class, and it worked quite well, giving us a good deal to think and to talk about. A good essay could be made of the film's use of CCTV (Closed-Circuit Television), for example.

What I'm prepared to provide for you and to discuss with you today is the Fishmonger scene. Intriguingly, the production decided to follow the First Quarto's order at this point (though not Q1's lines), placing the Fishmonger scene after the Nunnery scene. Ophelia has just left when Hamlet enters; Claudius is still behind the arras, observing the exchange:


I'm interested in the sniff that Hamlet delivers right before the "You are a fishmonger" line. The mistake / insult becomes more all-encompassing in this production: Polonius must even smell like a fishmonger.

The choice to have Polonius deliver some lines directly to the camera is also interesting, though I don't think I like it very much. He might better deliver the lines to the one-way mirror behind which Claudius stands.

At the end, you see the CCTV monitoring the entire play. That is a fascinating device, and you'll just have to be patient and wait for a more detailed analysis of it.

And I'd like to make one final point. David Tennant's most famous role to date is, of course, of The Doctor in Doctor Who. The Doctor doesn't come through very often in this production, to the credit of David Tennant and the director. But a half-vocalized "Well" just after "plentiful lack of wit" is one place where the Doctor himself might as well be delivering the line!
Links: The Film at IMDB.