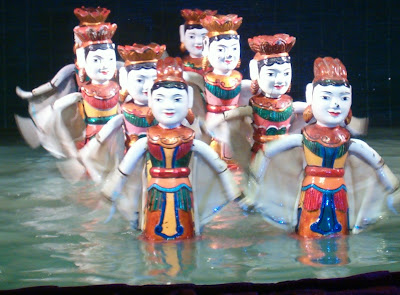 A Dream in Hanoi: A True Story of Love, Stage Fright, and Noodle Soup. Dir. Tom Weidlinger. Perf. The Central Dramatic Company of Vietnam; Artists Repertory Theatre of Portland, Oregon; F. Murray Abraham. 2002. Videocassette. Bullfrog Films, 2002.This magnificent documentary tells the story of a collaborative production of A Midsummer Night's Dream by two acting companies—one Vietnamese, one American. The entire process is fascinating beyond belief, especially when it centers on the places where the two cultures clash.

In this brief clip, we see the clash manifesting itself in the directors' visions of Puck:

These singing, laughing, drum-beating servants become the source of a number of conflicts throughout the rest of the rehearsals and the production run. Yet there is more at work here than two directors’ competing ideas of what constitutes a valid adaptation of a Shakespeare play. East and west are brought together, but the result is far from harmonious. The reason for the dissonance lies in the west—in its reluctance to collaborate, to compromise, to comprehend another culture, and to carry out its stated intentions consistently and conscientiously.

Doan's idea of adding servants for Puck seems to be the ideal place for a Vietnamese appropriation of Shakespeare (rather than the other way around). Doan is appealing to the Cheo drama itself. Cheo drama and Vietnamese water puppetry are two forms of dramatic entertainment that are uniquely Vietnamese. Each developed over several centuries, and each has its own conventional characters, stories, and songs. Cheo drama traditionally tells stories in an intensely lyrical manner, and these stories are nearly always humorous and quite frequently involve turning ordinary things inside out and upside down. They are always accompanied by song and dance and the characters are painted with broad, stereotypical brushes. If all that is reminiscent of the commedia d’elle arte, it should also sound like the Athenian actors in the forest—and like A Midsummer Night’s Dream itself.

At other parts of the documentary, one of the American producers describes Doan's efforts as “Broadway extravaganza” and mentions them in the same breath as “Disneyland and Peter Pan.” This seems profoundly layered—to bring typical American flamboyancy to describe a subtle, long-lasting Vietnamese tradition and to object to it because such things have no place in Shakespeare.Links: The Film at IMDB.