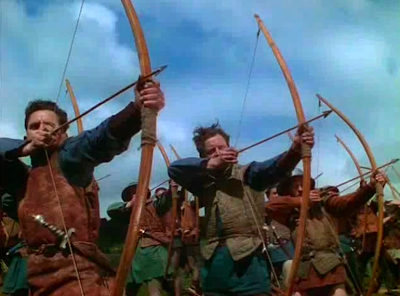 But Olivier's does have a remarkable opening. And it does have this remarkable battle scene. It's simply amazing how long the camera tracks with the galloping horses. It's wonderful. The Chorus of the play enjoins us to


Think, when we talk of horses, that you see them
Printing their proud hoofs i' the receiving earth.

With Olivier's film (no offense, Shakespeare!), we don't need to use our imaginations quite so much:

That's the significant difference between Olivier and Branagh. Both feature long tracking shots, but in Olivier's it's leading up to the battle, and in Branagh it shows the aftermath. Which is consistent with their very different ideas about Henry, not to mention the audiences for which they were made.

That's very insightful. After the battle, Branagh supplies that marvelously lengthy tracking shot with the tremendous Non Nobis build up. They both inspire—but, as you indicate, to different ends entirely!