A Few More Slings and Arrows to Suffer 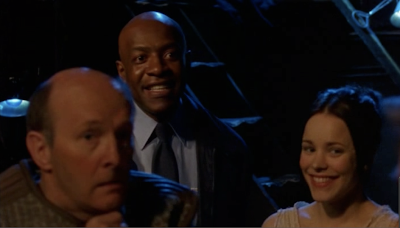 I had forgotten how wonderful the characters are in Slings and Arrows. At the end of the first season, Hamlet is finally going forward, despite the best efforts of a member of the administration to sabatoge the play so that . . . well, watch the series to get the details of the motivation. Everybody’s having a good time (never mind what the critics might say about the production), and there’s happieness for everyone!

They’ve given the character in the middle in the image above (Nahum—he’s an African-Canadian who talks light-heartedly about the troubles in the African nation from which he imigrated) has a marvelous thing to say to the administrator who’s trying to sabotage the enterprise. The administrator is trapped backstage—he stayed too late and can’t get through to his seat—and he determines to say to watch the play from the wings.

Nahum points his flashlight at him and says, pointedly, “If a farmer names his pigs, it makes the slaughter very difficult.”