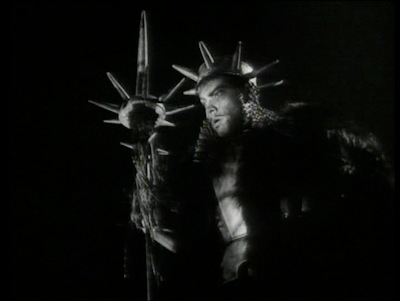 And, of course, Ah, Macbeth!

Last night, I started the Orson Welles Macbeth (1948) for my students—but I had to leave early. That mean that I missed one of my favorite Macbeths ever!

One reason I like it so much is the costumes. They’re reminiscent of what I might cobble together out of my office closet and / or my basement. The “Klingon Statue of Liberty” outfit for the closing scene is priceless.

Yes. Not the very hight of Shakespeare’s powers, that.

Welles’ Macbeth closes with this line . . . one the witches spoke in Act I:

Framing the play with the witches gives them enormous power and responsibility over the evil in the play . . . perhaps too much, in fact . . . but it’s an extraordinarily effective ending.