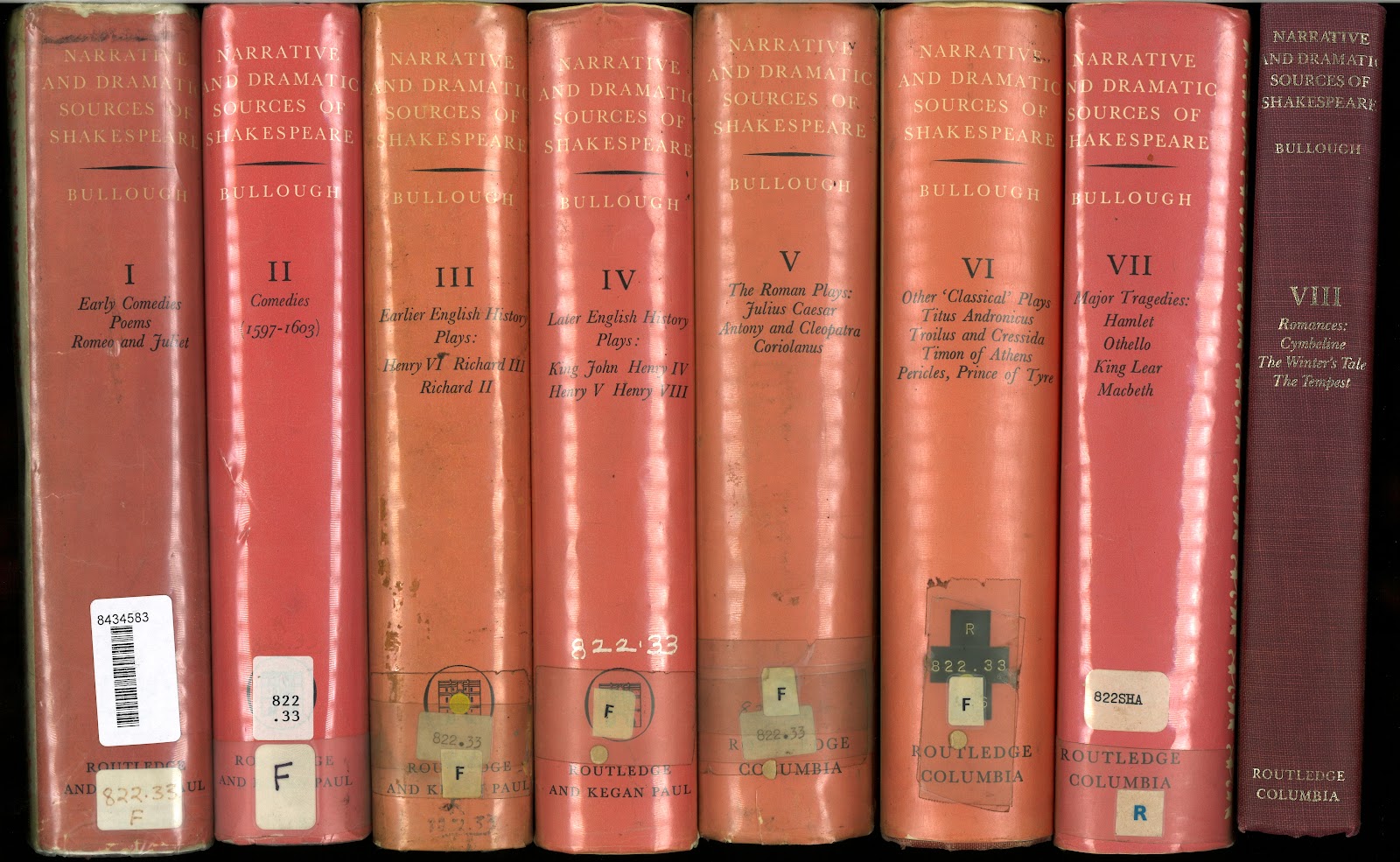 Bullough, Geoffrey, ed. Narrative and Dramatic Sources of Shakespeare. 8 vols. London: Routelege and Kegan Paul, 1957, 1958, 1960, 1962, 1964, 1966, 1973, 1975.Everybody's talking about The Northman (here's something from the Folger Library about it; here's the IMDB entry for it) , the film released this year that tells the story of Shakespeare's Hamlet—but not using Hamlet as a source. Instead, it uses Shakespeare's source as its source!
Though equally star-spangled, not very many people are talking about Royal Deceit—a.k.a. The Prince of Jutland (here's the IMDB entry for it). That film also takes the source Shakespeare used as its source.
Why (I hear you ask) is Bardfilm not talking about either? Well, I haven't talked about Royal Deceit because I watched it way back before this blog started. In fact, I think I watched it back when Netflix only mailed DVDs to its customers! And it wasn't too interesting to me at the time (I shall be re-watching it this summer to see if I have something to say about it). And I'm not talking about The Northman yet because I ran out of money in this year's budget and will have to wait until the next fiscal year to purchase the DVD.
Why then (I hear you ask) did you run out of money in the budget? Ah. That good question will allow me to tie up all these threads in a single post.
I spend some of my funds this year in buying Geoffrey Bullough's magnificent, nearly-twenty-years-in-the-making, deeply scholarly eight-volume Narrative and Dramatic Sources of Shakespeare. I found the volumes at different places at at relatively-bargain rates over several months. It's most common to find ex-library editions of the first six volumes, and I think that's because Volume VII and VIII came out seven and nine years later (respectively) than Volume VI.
And the purchase price was worth it. I used this work when I was in college to explore the way Shakespeare used his source material, and I found it invaluable. Bullough has much to say about the sources—and then he provides the relevant portions of those sources. It's utterly fascinating and at the highest level of scholarship (which doesn't mean some of his opinions haven't been superseded or at least challenged by later scholars).
If you want to make a film based not on Shakespeare but on the sources Shakespeare used, this is one very convenient place to start. Not only does it have the relevant parts of Saxo Grammaticus' Historyiæ Danicæ in a good translation, it has Bullough's notes about it (and about other relevant sources for Hamlet).
But let me show you!  First, here are Bullough's comments on Saxo Grammaticus (I've drawn lines thorough the parts that aren't relevant—not to redact them but to call your attention to the other parts): 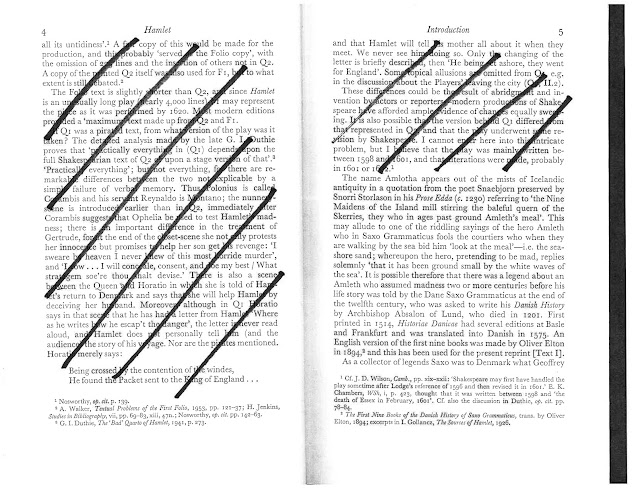 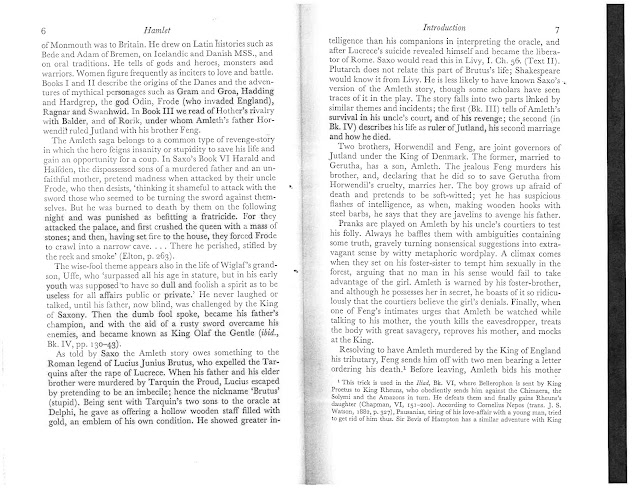 There are many more pages of summary and commentary along these lines, and I find it all irresistible. But let's turn from that for a quick sample of the actual source material from Saxo Grammaticus: 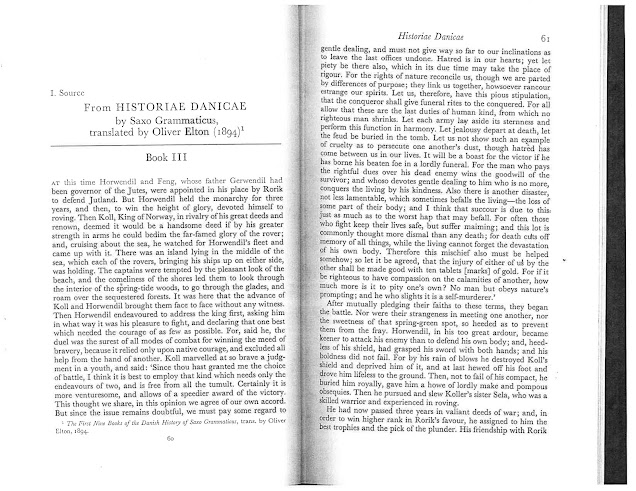 This is another delightful resource that I'm so glad to have on my shelf. I'll be dipping into it regularly over the next [however many] years.
Click below to purchase the books and films from amazon.com
(and to support Bardfilm as you do so).

Bonus Image: Cover of Volume VII, in which is included all this marvelous Hamlet stuff—and much, much more! 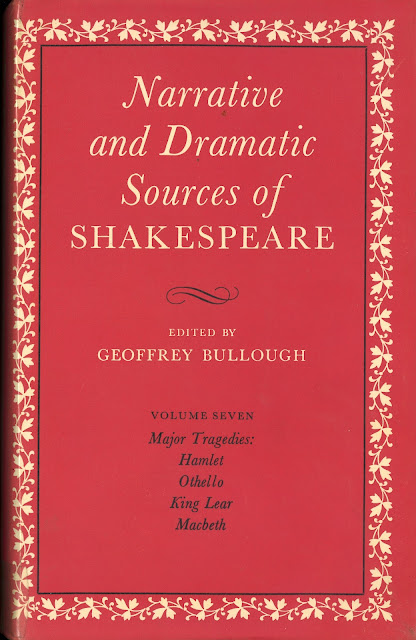